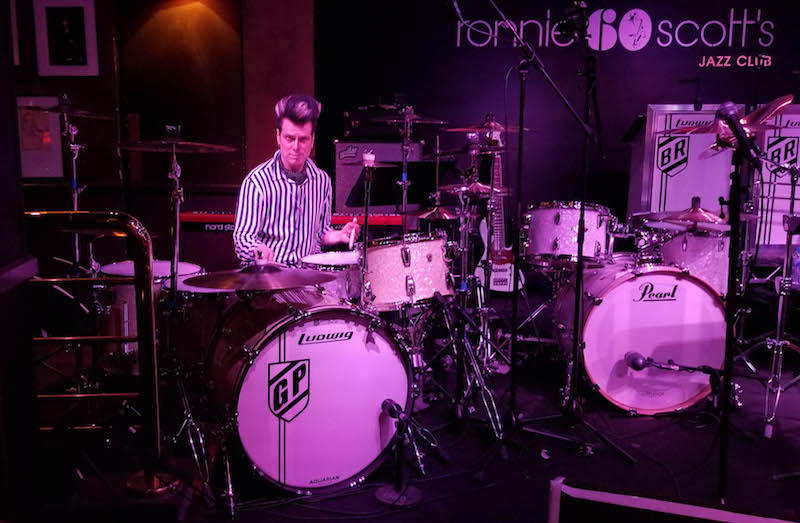 Hello Modern Drummer readers! The last time I had the honor of gracing the MD “On The Beat” was back in January 2012. “Welcome Back Potter!”

For you new readers, I have been the drummer with the Buddy Rich Band for eight years now. Cathy Rich (Buddy’s daughter) and I brought Buddy’s band back as a touring, living, breathing sixteen-piece big band. The group features alumni who played with the BR Band at some time in their careers and who now travel the world to bring Buddy’s music back to the masses, just as Buddy asked Cathy to do before he passed.

In 2012 we went to England with the Buddy Rich Band for the twenty-fifth Buddy Rich Memorial Concert at the London Palladium. That show was my first show ever with the band, but also included some of the biggest names in the drumming world including Dave Weckl, John Blackwell, Ginger Baker, Ian Paice, and Gavin Harrison.

It is now June 2019, and much has happened with my drumming, this Buddy Rich odyssey, and myself over these last eight years. We have played all over the world, recorded and produced a Play Along Book Package of Buddy Rich Classics for Hal Leonard Publishing, played the Grammy Foundation Museum in LA honoring Buddy, and received a star on the Palm Springs Walk of Fame (presented to Buddy). I was honored at all the institutions of higher learning that I attended, performed at Bonzo Bash, and was even able to throw in a couple of stints as a counselor at the Rock and Roll Fantasy Camp, with rock luminaries Paul Stanley from Kiss, Nancy Wilson from Heart, and blues legend Buddy Guy, to name a few.

I am excited to have just played at Ronnie Scott’s UK in London. The band and I, along with Cathy, were there in 2017 with special guest Dave Weckl to play twelve sold out shows at the legendary jazz venue for Buddy’s centennial, 1917-2017. This latest return included six nights, twelve shows, and were all sold out. Our special guest was drumming icon/Deep Purple’s Ian Paice.

We are pushing the boundaries of Buddy’s Band and music with guest artists adding their touch and feel to Buddy’s genius. As the year goes on, and into 2020, we have many new adventures on the horizon and I will share them with you fellow drummers in my next “On The Beat.”

I am living a “drummer’s dream” here. As I stated in my recent Jules Follett Sessions Panel interview with Dom Famularo, “Follow your dreams!” There is no more gratifying way to approach life and make your way through it, then by setting goals and attaining them. Aim high, shoot for the stars; even if you don’t make it all of the way, you are still higher than you would have been before you started. Thanks for reading!

For more on Gregg, visit http://www.greggpotter.com.

For more on the Buddy Rich Band, visit http://www.thebuddyrichband.com.