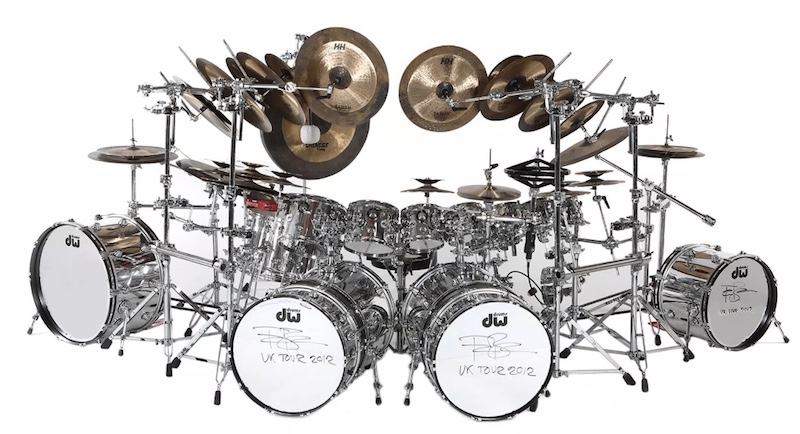 Backstage Auctions, Inc presents the upcoming “All Access David Frangioni” auction event which will feature a host of impressive and historic rock and audio memorabilia including drums and drum kits, audio equipment, and more, from award-winning audio engineer, author, and collector David Frangioni. The auction will go live on March 16, 2019 with a special VIP preview of the entire online catalog beginning on March 9, 2019.
Complete, historic drum kits will be up for auction, including those from drummers such as Carl Palmer, Carmine Appice, Eric Singer, Terry Bozzio, Gregg Bissonette, and Mike Portnoy. There is an overwhelming assortment of Carl Palmer, Asia and ELP road cases, gear and equipment, as well vintage road cases that belonged to Cozy Powell from his Black Sabbath years. Dozens of collectible snare drums and an exciting offering of vintage recording studio equipment will be up for auction. The exclamation point to this auction will come in the form of a broad selection of A-level memorabilia related to KISS, ELP, The Beatles, Rolling Stones, Led Zeppelin, Pink Floyd, RUSH, AC/DC, Michael Jackson, Aerosmith, Black Sabbath & Ozzy Osbourne, U2, Van Halen, Metallica, Motley Crue, and many others.
Frangioni is a music industry veteran who amassed this collection through years of professional drumming and audio expertise. After beginning his career working with Aerosmith for 13 years, Frangioni received many gold and platinum albums as technical consultant, engineer, and/or programmer, who later worked with industry icons including the Stones, Ringo Starr, Elton John, Sting, Bryan Adams, Journey, Styx, Phil Collins, Shakira, Rascal Flatts, Ozzy Osbourne, and Chick Corea. The majority of his unmatched collection of historic drum kits, equipment, and memorabilia, which have been either acquired at auction or through his music industry relationships, was on display in his book Crash: The World’s Greatest Drum Kits from Appice to Peart to Van Halen.
Backstage Auctions owner Jacques van Gool comments: “David’s collection is a fascinating mixture of historic drum kits, snare drums, recording studio used equipment, legendary road cases, and an impressive offering of traditional music memorabilia. Whether you’re a drum enthusiast, gear head, or straight-up collector, this auction will offer something for everyone. David Frangioni is a top authority on everything drums, and his private collection is second-to-none. “Combine that with his credentials in the recording and music technology arena and you know that you’re hosting a most intriguing auction.”
The “All Access David Frangioni” Auction beings with a preview of the catalog on March 16, 2019, and is open worldwide from March 16 to March 24, 2019. The catalog and auction will be accessible here: https://www.backstageauctions.com/catalog/auction.php
For more information and to register for a VIP All Access Pass visit:  www.backstageauctions.com