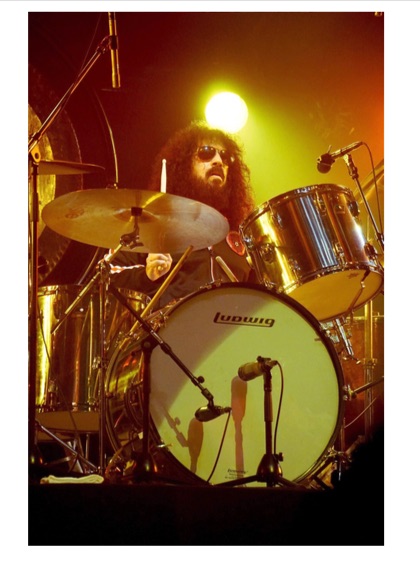 Hello MD folks! Some of you may know me, some of you may not. For those who don’t, I’m most known for being the drummer of Quiet Riot since 1982. We continue to tour year in and year out as well as write and record new music.

We released our eleventh official studio CD Road Rage this past August. We released our next one, called One Night In Milan, a live CD/DVD and BluRay, on January 25, 2019. Both are available via Frontiers Music Srl. Quiet Riot is currently on tour and in the studio working on our thirteenth studio recording for a near future release. When my schedule allows, I also perform with Jimmy Sakurai, who is Jason Bonham’s guitarist.

For gear, my go-to snare drums for most of my career have been my personal 6.5×14 Ludwig 402 Supraphonics, of which I have many in my collection. My number one choice is the 1975, which I purchased in 1975, that I used on the multi-platinum selling Quiet Riot record Metal Health. My number two is the 1968, which is COB and is on numerous sessions I recorded, including Hughes/Thrall, the Billy Idol single “Mony Mony,” and W.A.S.P. The Headless Children. I bought the 1968 snare drum for my seventeenth birthday.

I have been with Sabian since 1983. My go-to cymbals are my APX—24″ ride, 20″ and 18″ crashes, and 15″ hi-hats. These are the sizes I’ve played from the age of sixteen. I’ve been collecting drumsets and snare drums since I started playing at fourteen years old. I have more than 182 various snare drums in my personal collection and I actually still have my first snare drum, a blue sparkle Kent.

Thanks for reading! I hope to see you on the road sometime somewhere. Cheers!

Watch a trailer of the band’s music documentary Well Now You’re Here There’s No Way Back at www.quietriotmovie.com.