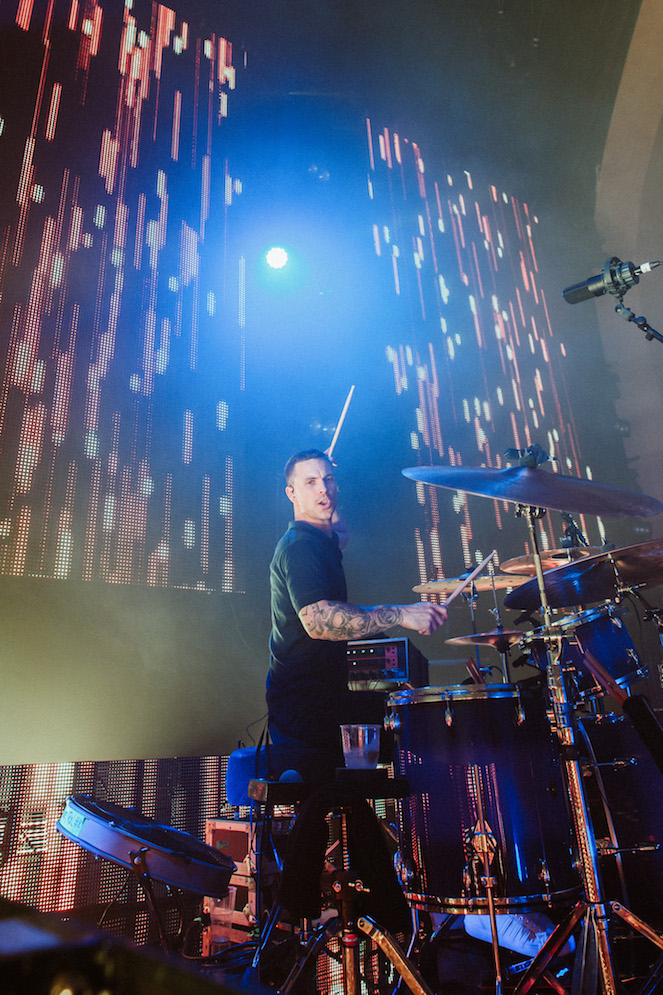 Hi MD readers, I’m Dan Flint. I play drums in the rock band You Me At Six. We released our new album VI in October 2018, and will be touring the US in early 2019.

Rock drummers like Chad Smith and Travis Barker inspired me when I was growing up. The more I got into drums though, the more I gained great respect for players like Jojo Mayer. With Mayer, it’s the way he uses more of an electronic feel in his drumming—the kind of beats and phrasings that you would hear a lot more in garage, house, and techno music, but he manages to apply them to an acoustic kit, which I find really interesting. I try and apply little moments like that in my playing. Obviously being in a rock band you can’t do it too often, but I try and take pick-me-ups that Jojo does or that kind of style of music, and apply it to my playing.

Our album VI was really fun to record. During the recording process we never played a song from start to finish. It’s not really a front to back style drumming technique, but something different this time, which I found myself enjoying a hell of a lot. I like the idea of production and the idea of creating loops. I’ve done other albums where it’s a performance from start to finish and a lot of great stuff has come from that, but this time around we decided that we wanted to create loops and create breaks and piece things together as though we were dance or hip hop producers, which is what our producer Dan Austin and I really like. It’s a really interesting way of looking at a drumkit and the instrument in general. We would play everything individually and would find patterns and loops that worked well together, and that process kept it super exciting. It also meant that we could manipulate the sounds in any shape or form and create all sorts of crazy sounds from me hitting whatever I could find around the studio! This is something I’ve found that I am quite passionate about and I can see myself doing on a lot of our albums moving forward.

In the studio working on VI, I used an old Gretsch kit that’s got a lot of beef to it and I also have a Gretsch Bell Brass snare that I just seem to use all of the time, whether it’s live or in the studio. There are some really cool techniques you can do, where you can really loosen off the snares and put crisp packets attached to it or weird things like that, and you can get a really dead but kind of tacky 808 sound. I also played around with getting these cool almost electronica sounds from an acoustic drumkit, which was lots of fun. If you tune it properly, it rings nice and it’s got a great attack so it’s definitely my go-to for both live and in the studio.

For live, I use the Gretsch, and Zildjian cymbals that are always amazing. A lot of my drumbeats that were played on the album have come from sort of chopping up loops that I found or creating loops myself on a music production programmer. I really enjoy getting creative with beat making on a machine and MIDI keyboard using Pro Tools or Logic. This is something I’ll definitely be doing on the road to keep me occupied; applying it to an acoustic kit is something that is really interesting afterwards. It’s often fun to start out with an electronic feel, see where it goes from there, and just kind of build from that. Thanks for reading!