I want to thank Modern Drummer for having me. What a cool community. My name is Joseph Arrington, and I play for A Lot Like Birds, Sianvar, Alone, and So Much Light, and I’ve toured with acts such as Chiodos and We Came As Romans.

As I spend twenty-three hours of my days on the road traveling, reading, practicing, and inhaling coffee in anticipation for that one hour of music I play every night, it creates a bittersweet scenario for immense reflection. It also provides a fantastic setting to do a lot of listening. Those of you whose brains don’t have an “off” switch will relate. This is where we get weird.

I get asked about improvising outside of the “box” often, because when I play live with A Lot Like Birds and Sianvar, I don’t play the drum parts from the album verbatim. All of my drum fills are improvised, save a few iconic ones, and my kick/snare/hat phrasing varies from night to night. Does it always work? Most of the time. But some nights these phrases and ideas spill out of me that I barely realized I was capable of, and sure, some nights it may not fit the music perfectly. In this sense the original album version is the “box,” and my musical personality refuses to stay inside it when I play live. I’m not going to preach that this is the “correct” way, but simply that it’s my way.

The “box” is such a cool thing to consider. When I’m listening to a track with someone like Vinnie Colaiuta on the skins, for instance, despite the sensitivity or simplicity of the song, he might just drop a floor tom bomb, or a crash without a kick. It always seemed to me like a devilish kid getting away with murder because his mom loves him too much. I found myself thinking, How did he get away with something so uncustomary—and how did it sound so perfect? The answer, of course, is a cosmic concept for a lifetime of study. But broadly speaking, would you go back in time and critique Victor Hugo on possible grammatical errors? Would you rewind and tell Pablo Picasso that his paintings didn’t actually look like people? The answer, of course, is a very strong No. Because in a profound sense these creations were far beyond the proverbial boxes their respective mediums would suggest. When people tell me they hear “jazz” in my playing, I realize that the relative nature of everyone’s musical concepts are so profoundly different. Perhaps twenty-plus years of playing jazz makes its way into my playing, but you could hardly call A Lot Like Birds any incarnation of jazz. 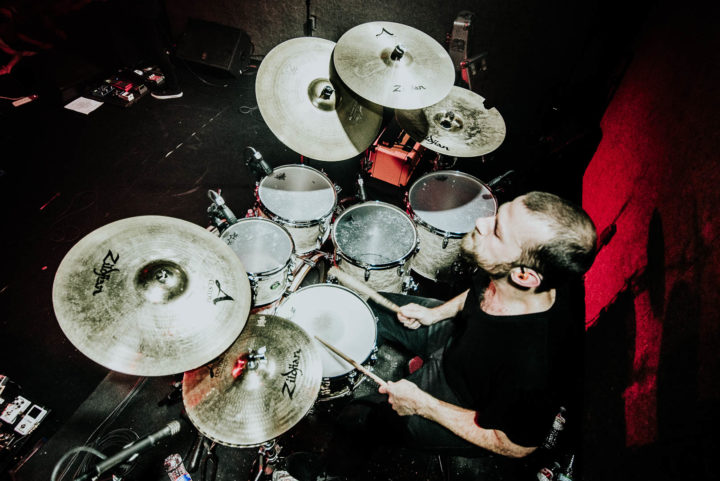 I feel that musical “rules” are meant to be broken. I habituated ideas and parameters and styles that worked as a solid musical foundation, and since then I’ve freed myself. I appreciate both sides. In high school jazz band, someone is going to tell you that playing a floor tom in a ballad was a big mistake. Think they would give Vinnie the same criticism? And after all, what is the difference between you and Vinnie? Perhaps just a little practice and the fact that you’re you!

Watch an exclusive Joseph Arrington drum play-through of A Lot Like Birds’ “No Attention for Solved Puzzles.”