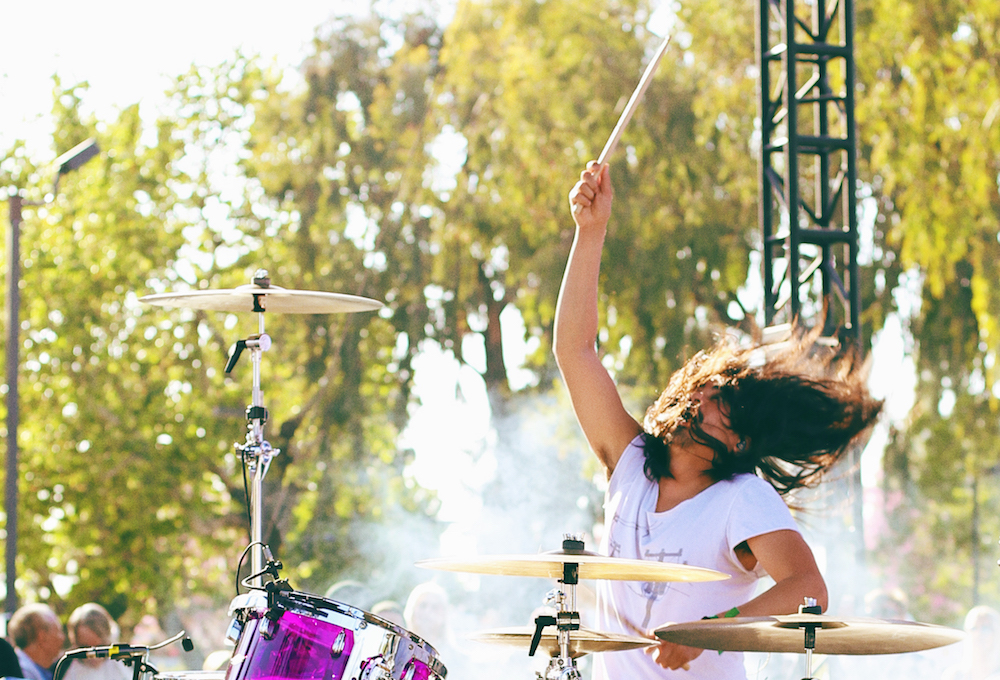 The alternative indie-pop/rock group Silversun Pickups is on the road with veteran rockers Third Eye Blind through July. Since 2002, the group’s drummer, Christopher Guanlao, has energized the band’s live show with a wild, head-banging stage presence that complements his propulsive parts. Modern Drummer asked Guanlao about the tour, his animated approach, and more.

MD: You have such a lively style onstage. How do you maintain that level of energy throughout a set?

Christopher: It depends on how long the set is. We recently played the When We Were Young festival in Santa Ana, California, and we had a forty-five-minute set. I treated the show like a sprint, hit hard, and tried to stay energetic throughout the set. With a headlining show—about an hour-and-a-half set—I’ll treat it more like a marathon. I try to tame my excitement and adrenaline a little in the beginning and pace myself so that I have something left in the tank at the end. I also know the moments in songs or in the set where I drop out or it dynamically changes, so I can pull back and take a breather.

MD: How do you prepare for longer tours?

Christopher: I’ll go running a lot to get my heart rate used to multiple shows. Running also helps when you have gigs in high-altitude cities. The air is really thin in places like Aspen, Colorado, or Bogota, Colombia, and it’s a tremendous help if you’re physically prepared for it.

In terms of practice, I’ll play for a couple hours a day about a week before a tour. I’ll work on older songs to stay sharp and get the muscle memory back into shape. And playing that long is good for getting those calluses hardened up. One of the worst things that can happen is to get blisters on your hands the first day of tour with a few consecutive shows lined up.

MD: Are you left-handed? How’d you develop your open-handed style?

Christopher: I am left-handed. I’m self-taught, so my style is pretty messed up, but it works for me. When I was a kid, my dad bought me a drumset for my birthday from a friend of mine. I didn’t have a clue what to do with it. So I looked at pictures and videos and set up the drums that way. Then I sat behind the kit and played the way that felt proper, which ended up being open-handed. A few years later during a gig, a drummer saw me play and convinced me to put my ride to the left of my hi-hat so I wouldn’t have to cross over the set. It looked and seemed totally weird at the time, but I tried it out, and it ended up being so much easier.

MD: What process do you use to replicate some of the grittier or more processed drum sounds from your records in a live setting?

Christopher: I was pretty stubborn about electronic drums and percussion, and I tried to resist for as long as I could. I still use a piccolo snare live to make processed electronic drum hits sound a bit more organic. But we were incorporating more and more processed drum sounds on our current recordings, and it became too much for me to ignore. So now I have a Roland SPD-SX sampler, and I play samples on that. I’ve also added a couple Roland BT-1 trigger pads around the kit to create more of an acoustic feel.

MD: I’m curious about the extended crash cymbal height on your right side. Is it more comfortable at that height? It definitely adds an interesting visual element to your playing.

Christopher: I think I originally did it because I thought it looked cool and interesting. But since then, it’s morphed smoothly into my style, and I feel that it’s actually easier for me. I love big movements and exaggerated, swinging hits, so having a high crash is perfect for those big dramatic swings. I actually have a harder time hitting my lower crash now. David Letterman once said that every time I hit that high crash, somebody should get a prize! So I’ll keep it high.

MD: Do you have a warm-up routine before each show?

Christopher: I do a lot of stretching about an hour before the show. I make sure I’m really limber and loose. I have so many routine stretches that I do to get ready for a show and ones that I do in between songs almost superstitiously. I’m like baseball player Nomar Garciaparra when he’s at bat—always double and triple stretching. Another thing I do before a show is massage my neck and shoulders a lot to get the blood flowing. I head-bang quite a bit, which helps me keep time and stay in the moment. If I want to do that day in and day out without breaking my neck, I need to stretch it out pretty well. All this helps me focus on the show and keep the intensity up. The last thing I want to do is go out there and half-ass it.

MD: Do any of Silversun Pickups’ songs change or evolve live over time?

Christopher: The older songs were arranged well before we recorded them, and the drums were practically recorded live. So those arrangements haven’t changed too much. But the songs on our last two records—Neck of the Woods and Better Nature—were mostly written during the recording process. So once we actually learned those songs and played them live, they did evolve a little. But we try to keep the essence of the recording intact when playing them live.

MD: Could you describe your current setup?