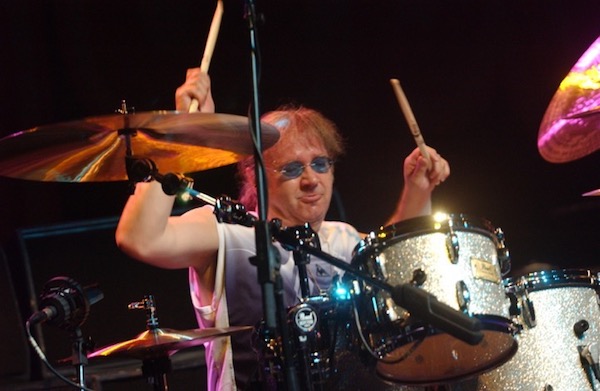 Deep Purple recently released its twentieth studio album, Infinite. Despite hints that the famed classic-rock band is ready to retire from the road, its sound—including the swaggering slam of its original drummer—is still a joy to behold. The July issue of Modern Drummer magazine contains an On Topic piece on Ian Paice; here’s more with the drummer.

MD: What are your thoughts regarding the music on Infinite?

Ian: The drum parts are fairly simple; that’s the nature of the times we live in and the music we’re creating. This doesn’t mean that they have to be boring, or that you have to treat them with any less respect than something more rhythmically demanding. Drumming is more than just counting 1-2-3-4. It’s about picking up the emotion of the track and trying to increase its musicality. The most important thing about the drum track is that it sounds musical and feels good. I think for the most part, I have managed to achieve that on the Infinite record.

MD: Did you track the music together with the other members live in the studio?

Ian: We always track the basic tracks live together. There are certain little interactions that go on between musicians, which only happen in nanoseconds: they’re there and then they’re gone, and everyone reacts to what their friends are doing in the studio. Sure, you can layer those things if you really need to separate the sound that critically, but then what you are doing is predetermined, and you know it’s coming, and it doesn’t seem to work the same way. So, we try to get as much of a live impression in the studio as we can; and really the only way to do that is to play together.

MD: In our last interview, you discussed how much you disliked the click and how it takes the life out of the groove and keeps the music from breathing naturally. Was this recording played along with a click? It sounds very natural, especially the seriously swinging “All I Got Is You.”

Ian: A few years ago, my very good friend Carmine Appice said, “You’ve got to treat the click as your friend rather than your enemy.” It’s a slight mental shift, but I took it on board and I try to treat it as a friend now. Obviously, the more you work with it, the better you get at it. I still believe it stops those moments of mad creativity that sometimes a drummer can come up with, and maybe only ever comes up with it once. I believe it does limit what you do. Sure, you can go back and replace a fill a hundred times until you get the one you want. For me, it’s more about playing naturally and not thinking about the fact that you’re going to be slightly ahead or slightly behind the beat when you’ve finished the fill. I’m learning to deal with it, but I wouldn’t say it’s my best friend yet. But I’ve stopped treating it as my enemy. So, yes, everything we did on the new album was recorded with a click.

MD: You are considered by many as one of the most swinging British rock drummers from the early-’70s heavy rock movement. The new track “One Night in Vegas” reaffirms that fact. What drummers or artists inspired your developmental stage of drumming?

Ian: I suppose the real difference is that all the early influences I had before I was a drummer were not rock ’n’ roll, they were from an earlier age of music. They were from my father’s music, which was ’30s and ’40s big band swing. Everything from that era has a bounce and roll to it. Those sounds were obviously going inside my head when I started to play drums. The only physical way I could translate what was going on in my head to my hands and my feet was by being influenced by those early swing sounds. That’s why the swing feel comes natural to me. So, if the drum chair in AC/DC was available, and it was offered to me, I couldn’t do it because the rhythm is too straight. I’d probably go mad trying to play that straight. The swing stuff comes natural to me, and it comes from those very early influences of swing music.

MD: Has your approach to drumming, recording, and touring changed over the years?

Ian: Not at all. When I got my first kit at age fifteen, the first thing I did was please myself. If it made me happy, that was the end of the story. The fact that others seemed to enjoy what I was doing was a bonus. Even fifty-three years later, I make myself happy first. Of course, that is knowing that I have all these years of experience and a lot more musical knowledge now than I had then, but I still find a rhythmic solution that I think is correct and makes me smile inside. That’s the only way I can put it.

The recording process has obviously changed, but I still love sitting down behind a great-sounding kit to record my drum tracks. If I go into a studio and I hit the snare drum and it goes bang!, then I’m happy. If I go in and it gives me a dull thud with no life in it, I’d rather not be there. That’s really important to me, and that has never changed. I know some guys who can go into the studio and completely kill the life out of the kit and be quite happy with what they get by the time it’s been recreated electronically. I can’t do that. I have to enjoy the sound of the drum as I’m hitting it; that will never change for me.

As for touring, it’s great fun when you’re a kid and you start to go around the world. All you have to think about is yourself and the music, and that’s easy. Later in life, you have more time-consuming responsibilities that you need to deal with. Yet you still understand and appreciate the wonderful gift of music that you’ve been given. You really have two lives. When one life gets to be too much, you can run away and be on stage with your friend, and be that fifteen-year-old kid again. And if you need a break from the madness of the music business, you can then go back home, put your feet down on the ground, take the garbage out, and go to the supermarket.

MD: Any closing thoughts or comments on the new music, the upcoming tour, and/or your plans for the near future?

Ian: When you’ve got as many albums out as Deep Purple does, and so many successful songs to choose from, it’s a balancing act between playing the songs you know you must play for the casual DP fans who bought a ticket to hear their old favorites, and then trying to squeeze in some new music to pique their interest and vary the show a little to try and keep it up to date. We will be trying to get in as many new songs off Infinite that we think will actually move from the studio to a live environment. Not every track works live, so we have to blend the old and new together. We will decide two or three days before the tour starts and then see what works. But whatever we decide, I guarantee within a few weeks it’ll be slightly different. Because at the end of the day, the audience will let you know which songs are working and which ones aren’t.

The tour is called the Long Goodbye tour. We don’t know how long it’s going to last. We purposely didn’t say “the last tour.” But it probably will be the last major “’round the world” tour. We left ourselves a little wiggle room. So when we do decide to finish this tour, we will still have the moral right and ability to take a few months off and then talk to each other and say, “Do we want to do it again or not?”