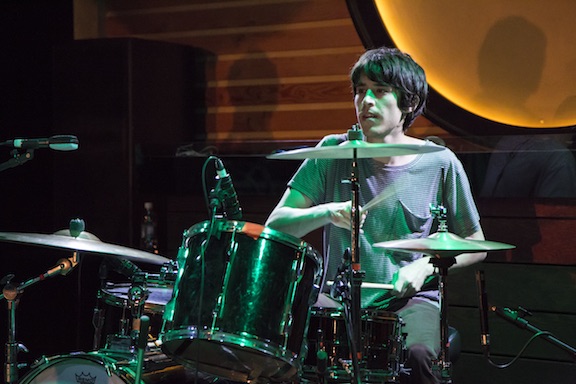 Modern Drummer recently spoke separately to the drummer on the highly regarded alt-rock band Beach Fossils’ new album, Somersault, and the group’s singer/songwriter, who knows his way around the kit himself.

MD: Dustin, what led up to the recording of Somersault?

Dustin: Somersault was first album we’ve released in several years. [Band regulars] Tommy Davidson and Jack Smith and I would switch instruments a lot during the sessions, so it was interesting having to teach each other our parts.

We recorded in a bunch of different places. I have a studio in Brooklyn that I work out of, and we go there mainly to work on songs and come up with ideas for them, and then we take them elsewhere. Most of the record was actually recorded there, but then we went upstate and recorded stuff there as well. It was our manager’s family’s home and they let us work there for a week or so.

Then we went to L.A. and recorded with Jonathan Rado of Foxygen. We recorded a bunch of stuff on tape there, and that’s where we did the drums. I like the way he records drums on to tape and dirties them up and stuff.

The process for the drums was really weird. I would basically be in the studio and come up with the drums for one of the songs—either me or Jack, depending on the song—and then we would either demo the drums onto the Logic file that we were working out of, or we would do MIDI drums in Logic and just try to recreate what we’d played. We turned those demos into mp3s and sent them to Anton a week or two before we went to the studio in L.A. We were just like, “Can you learn these and play them?”

MD: Since you play drums yourself, how come you hired Anton?

Dustin: I really like coming up with drum parts, but I don’t think I’m a good enough drummer to track it all the way through on tape and not mess up. I do a lot of looping and stuff. I did that a lot on my old records, though on this record there’s not much looping. It’s kind of the first time we’ve had everything played all the way through.

MD: What direction did you give to Anton?

MD: To your credit, the album feels fresh compared to your earlier ones, but not drastically different from a rhythm-section standpoint. 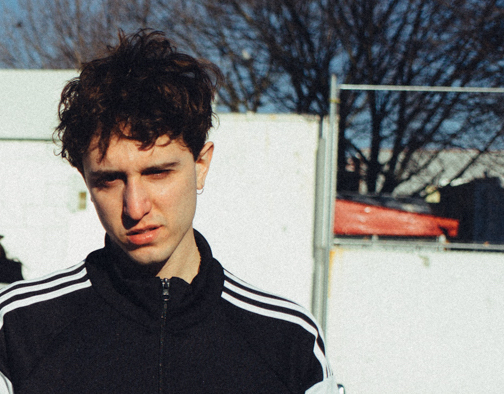 Dustin: Yeah, the main thing I wanted from the self-titled record [2010] and What a Pleasure [2011] was just having a very minimal, stripped-down sound. And then with Clash the Truth [2013] I wanted to do something that was more carefree and ramshackle, to kind of feel a little more like the live show. The guy who was drumming with us at the time, Tommy Gardner, played drums on that record. He’s a jazz musician who went to Juilliard for saxophone. He’s a real shredder, so his drumming on Clash the Truth was super crazy and really good. He actually just moved to China. He’s in Shanghai now.

MD: Is that the reason for the change?

Dustin: There were a lot of things coming together. Tommy was talking about becoming a Buddhist monk and he went on this meditation retreat, so we weren’t sure what the future of him playing with us was going to be. And he wasn’t really involved in the writing process; the way the three of us wrote before is we’d spend like three hours writing one riff, and I know that if a drummer’s in the room, that’s painful.

MD: When did you start playing music?

Dustin: When I was eight I started on guitar and bass, which I taught myself. My parents are musicians, so I was able to play the instruments that were around the house. And my grandfather is from Cuba and plays percussion, and he has this incredible style. When I was a kid he’d always show me these intricate AfroCuban rhythms. He was a huge inspiration. He still plays.

MD: Anton, what was the experience like for you recording Somersault?

Anton: When Dustin sent me the demos, all the tracks already had drums either programmed or that he had played himself. He’s a totally competent drummer. So it was good not starting from scratch. I feel like he had a pretty precise idea of the feel on every song, but was also open to ideas and building off what he started. So it was cool building off what he came up with.

MD: Have you had experiences like that in the past?

Anton: When I joined one of my old bands, Depreciation Guild, the singer programmed all the drum beats himself. He was always quick to talk about how he couldn’t play drums himself, but he had an amazing sense of rhythm and constructing drum parts. Then with other bands there’s been sort of free rein to do whatever I thought of, playing off the riffs or whatever.

MD: Dustin mentioned previously that he’d first seen you at a gig.

Anton: It was with Jerry Paper. Dustin owns his own label, Bayonet Records, and his first singing was Jerry, who lived in Brooklyn at the time but who’s in L.A. now. I met him on tour with my other band, the Pains of Being Pure at Heart, and when he came to L.A. he told me he was looking to start a band. We were playing a record release show in Brooklyn, and Dustin came to the show. We just talked for a bit afterwards, and Dustin was very complimentary about the way that I played. He was like, “I want you to play on my album,” but I didn’t think much about it. I reminded him that I’m in L.A. But then he hit me up on Instagram, I think, and was like, “We’re going to be out in L.A.,” so that’s how I got hooked up with those guys.

MD: How were you presented with the music?

Anton: Dustin sent me the demos the week before we got in the studio, so I didn’t have much prep time. We recorded with Jonathan Rado from the band Foxygen, in his home studio, over the span of two or three weeks. The rest of the band was there longer, I believe.

The way Rado likes to record, it’s all analog to tape. He doesn’t have any digital equipment. And he prefers to record song by song, rather than all the drums, then all the bass, etc. That’s why it was time consuming. I’d come in in the early afternoon and we’d do the drums to tape, so there wasn’t the luxury of overdubs. So we’d do it until we had close to a perfect drum take. Then we’d do guitars, then bass, then vocals. So either the next day or two days later, we’d start again with the next song. I’d never worked like that before.

MD: Had you ever done an all-analog recording?

Anton: No. In other bands we might record to tape but then immediately dump it into Logic or Pro Tools—cut it and overdub. It was really difficult [laughs], but I think it paid off. From what I understand, the guys went back in and did additional recording at the practice space in Brooklyn. But the drums you hear on the record are exactly like they sounded in Rado’s studio.

MD: What kind of direction did Dustin give you about your parts?

Anton: I think Dustin wanted me to play on the record because my approach is pretty minimal. I don’t know, I’ve always just been turned off by flashy or busy drum parts. All my favorite bands and drummers play simple, minimal stuff that fits the song really well. I went through the record on my own and wrote parts in my head and kind of had it all planned out as far as where to play fills. But there were definitely parts in the recording process where he was like, “Let’s do even fewer fills. Let’s do a pass with no fills.” And then we’d eventually settle on a middle ground. And it was fun working with Rado because he had a similar approach. “Let’s do a pass where there’s no floor tom at all. And he’d just take away a floor tom. And then, “Let’s do it without any crash cymbal,” so all of a sudden there’s no crash on the kit. Oh, shit, my drumset’s shrinking! [laughs] But it was kind of cool to not rely on muscle memory; it was very spontaneous. What can I do to make this cool? So it was pretty fun.

MD: What groups are your priority at the moment?

Anton: I have a band with my twin brother called Ablebody. I also play in kind of a punk band called Hit Bargain, where I’m more involved in the songwriting side—I’ve known those guys forever, and this is the latest iteration of the group. Pains of Being Pure at Heart have a bunch of shows coming up. And there should be a new Jerry Paper album out soon. There’s a lot going on.