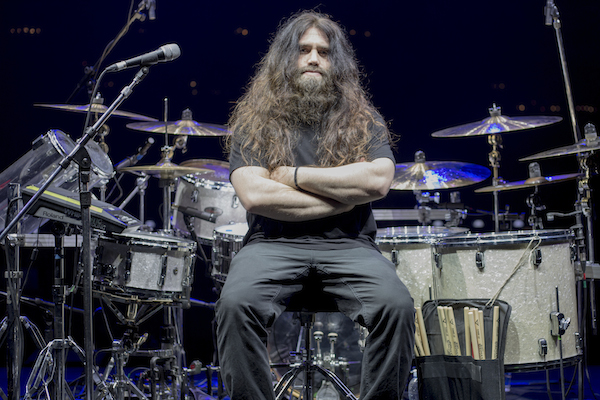 Hey there, Modern Drummer readers! I’m Jamie Perkins, the drummer for the Pretty Reckless. We’re a rock ’n’ roll band that has been steadfastly irritating the online hipster community since about 2009.

I think it’s really cool that MD is letting me write an “OTB” about what we’re up to, partly because I’ve never done this before and partly because the rest of my life essentially consists of getting compared to Hagrid (I have yet to participate in anything Harry Potter related, so I don’t know if the resemblance reaches beyond the physical) and hitting random, defenseless round things for a living. I feel like it shows a lot of trust from their side.

So we’ve been out touring to promote our new album Who You Selling For and latest single “Oh My God.” We’ve had a great mid-tour highlight recently when we got to play our song “Take Me Down” on the Conan O’Brien show. We brought in some amazing backup singers to mix it up, the staff and crew there were all incredibly gracious, and in the end we all wound up having a killer time that day. One might be under the impression that performing on national television would be a stressful event, but it was really quite painless. It was a quick, easy soundcheck, followed by a few hours waiting to play, while watching your touring crew straight up assassinate the craft services table like a pack of starving Rancors.

That being said, it’s looking like the rest of the year is going to be a busy one for us. We’ll be touring all over the world, including an upcoming spring tour that’s a mix of headlining shows (awesome), festivals (double awesome), and a few select dates opening up for Soundgarden on their US tour (super awesome).

Beyond that is a summer appearance at Lollapalooza in Chicago and a festival run through Europe, including our first time at the legendary Reading and Leeds Festival. After that, things get a little fuzzy, but we have plenty of irons in the fire.

Lastly, on a personal note, I just wanted to say congratulations to my friend Shane Kinney, owner and operator of the Drum Center of Portsmouth in my native state of New Hampshire. Shane and his staff have turned DCP into a world-class drum shop, and are making the move into a much larger space where they can spread their inventory out a bit. I go there a lot to check out new gear and kick around ideas, so I’m pretty stoked for this move. It’s a luxury to have a store like that in northern New England.

Anyway, that’s basically what’s up with us. Thanks for reading and I hope to see you at a show sometime!

For tour dates and all that good stuff, visit http://theprettyreckless.com.