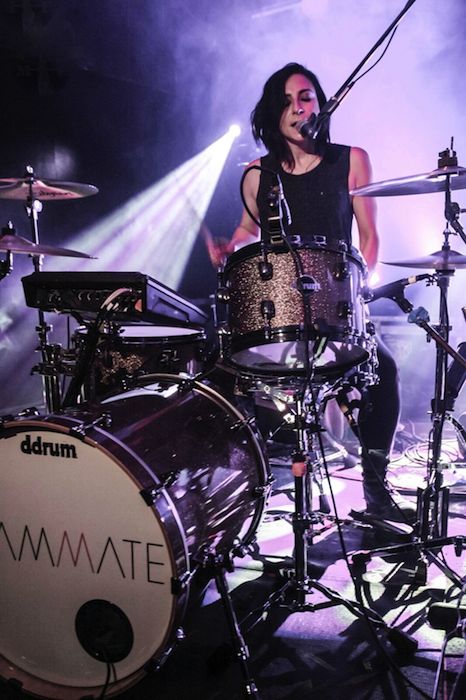 Hey Modern Drummer readers! My name is Dani Buncher and I make up half of the band TeamMate. We are a keys and drums duo, and we both sing lead vocals. The mental exercise involved while singing lead and drumming is equal parts exciting and frustrating and takes a whole lot of muscle memory.

I started playing drums when I was around eight years old. I spent the first year of those lessons learning rudiments and basic rhythms on a drum pad. My mother really wanted to make sure I was committed before making the investment of buying a kit. As time went on, my lessons were split between drum pad and full set exercises. This led to a natural curiosity in drumline, and as I got older, I marched snare drum in high school and college.

There is nothing like drumming in the line. Every note is intentional and exact to the point of feeling militant. The preciseness involved in playing in a line is spectacular. To hit that first note alongside twelve other snare drummers, with the attack sounding like it could have come from one person, is incredible.

Playing in the line, I became a mentally visual drummer. When you mark-time (march) while playing, you have to visualize where every step fits within whatever rhythm you’re drumming. Your steps become a silent subdivision. I remember early on that I began “seeing” the sounds more as shapes and they all had a special place within the puzzle. The different sections within the drumline (bass drums, tenors, cymbals) all represented different shapes, some more abstract than others. When a part didn’t line up as it was supposed to, I visualized a jumbled mess. As the line locked in, there was a more cohesive visual that would leave me with a feeling of calmness. After a time, the parts naturally become second nature and the visualization begins to disappear as the rhythms and movement hit autopilot and enter into your muscle memory.

I haven’t marched in years but I still use this practice behind the set. Visualization has become crucial for me when learning new TeamMate songs. Once I lock in the drum part, I visualize exactly where my voice and phrasing fits within the rhythm I’m playing. Once I can capture it visually, there’s a lot of repetition involved to lock it into muscle memory. It has definitely become easier to merge the two together, but there are still some challenging songs that may take a little longer to feel comfortable. However, when you cross that threshold and have a “how do my arms and legs know what to do right now?” all while singing and performing on stage, you know you have mastered a beast.