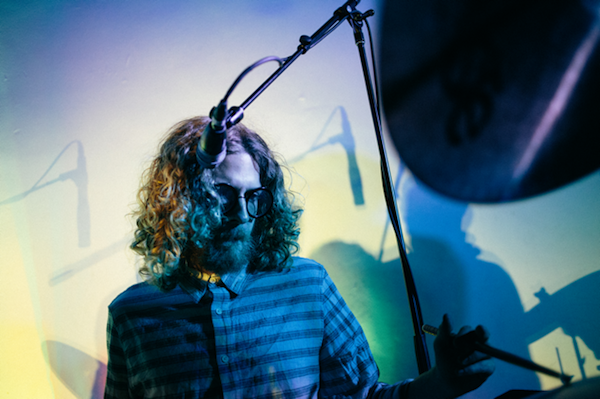 This past September, Los Angeles–based indie folk-rock group Dawes released their fifth studio album, We’re All Going to Die, a record teeming with drummer and vocalist Griffin Goldsmith’s deep pocket and solid grooves. The band, which is also composed of Goldsmith’s brother Taylor on guitar and vocals, Wylie Gelber on bass, and Lee Pardini on keyboards, is currently in the midst of a fifty-date tour across the U.S. in support of the group’s newest effort, with shows booked through early May. Goldsmith recently delved into his heavy feel and more with Modern Drummer Online.

MD: Are there any differences between Dawes’ recordings and the band’s live performances?

Griffin: I’d say there’s a huge difference between how we record and how we play live, and that’s especially the case with our latest record. In the studio we were able to get as weird with the drum sounds as we wanted. Every song required different drums. As much as I wish I could set up several kits live, it wouldn’t work. But I have added some pieces to my kit to try and cover most of the sounds from the record.

When we first embark on a tour, the material as it’s represented on the record is still fresh in our minds. The parts that we play live reflect that. They’re very close to—and sometimes exactly the same—as the parts that were played on the session, although there are moments during which we stretch and embellish. It’s as if every arrangement has a basic skeleton and we can fill it in as we please. My fills change every night. Musical cues often lead us in and out of certain sections. But as time passes and we get comfortable with playing the new songs, the parts and arrangements imperceptibly change. I’ve recently gone back and listened to certain recordings of ours, and it’s interesting how far away we’ve strayed from certain aspects of the record. But I think that’s healthy. A song really gets a chance to live on stage.

MD: How did you develop your feel and deep sense of groove?

Griffin: I think that my feel is a product of the records I was listening to as a kid and the drummers that influenced me in my most formative years as a player—particularly everything played on Steely Dan records, and anything Stax/Volt put out. John Bonham was an influence, which I think goes without saying for most drummers. Drummers like Al Jackson and Bernard Purdie blew my mind the first time I heard them play.

I was always more attracted to the groove-focused drummers. Maybe that’s because I didn’t have the technique to do anything other than that. The aphorism that’s been applicable for me in every case, whether in the studio or on stage, is “feel first.”

MD: How did you develop the ability to sing and play drums at the same time?

Griffin: I started to sing and play at the same time, simply because at one of our first rehearsals my brother said something along the lines of, “Yeah, you can do it.” And I did it. There are independence challenges. It’s like having a fifth limb. Gary Chester’s book, The New Breed, addresses this. It’s just a muscle that needs to be exercised, and it becomes easier over time.

MD: Do you incorporate any electronics or backing tracks into your setup?

Griffin: I’ve incorporated electronics into my new setup. I was very late to the party, but I’m excited about it. Jim Keltner came in one day while we were tracking a song called “When the Tequila Runs Out,” and he programmed some sequences on his Akai MPC4000. I was so blown away at the sounds that he made with it that I found one the next day and bought it. I spent downtime in the studio learning how to use it. It’s an incredible instrument, and since then I haven’t done a session without it. There’s another song that has a drum loop—a substratum type of part happening. In order to trigger all these sounds, I also incorporated an SPD-SX into my setup.

MD: During your recent performance on Jimmy Kimmel Live!, in the fill that leads into the first chorus of “When the Tequila Runs Out,” it looked like you played it with one hand while getting ready to possibly start a programmed sequence with your left hand once the chorus hits. How’d you develop that independence?

Griffin: I was triggering a very low Syndrum sound to accentuate the downbeat of that chorus. The ambidextrous approach is something that I’ve been trying to cultivate for many years. I’ve always loved the way left- or open-handed drummers play. It’s almost like hitting a shift button on a keyboard. It opens up alternative sounds and grooves when you play like that.

MD: Do you ever feel any pressure playing higher-profile gigs such as a spot on a TV show or larger festival?

Griffin: At this point I don’t get nervous anymore. But it has happened to me before. I think after making slight mistakes on TV or in front of large crowds, I realized how little that mattered, and also how poisonous it was to harp on. My performance has proven to be better if I’m in a relaxed mental state. It’s also easier on the body. I think over the last five years I’ve willed myself to this place as a player.