More than a decade after taking over kit duties in the progressive jam band Umphrey’s McGee, the group’s current drummer sings the praises of recently released work by the man who came before him, a gifted player who died way too young.

It’s not so common to find a prominent touring and recording drummer dropping MD a line to help promote somebody else’s project. But that’s exactly what happened when Kris Myers asked us to check out Concerto for Double Moon by the Pneumatic Transit, featuring Myers’ predecessor on the Umphrey’s McGee throne, Mike Mirro, in what would turn out to be his final album. Mirro passed away in January 2014, at age thirty-six, before the album was completed.

“He did an incredible record, and I want to pay homage to him,” Myers says of Mirro, whom he replaced in Umphrey’s McGee in 2003, when the founding member left the band to attend medical school. “I felt it was my duty to come forward and tell people about this awesome album. It’s a classic throwback and a modern fusion record, and not a lot of people are doing that these days. I was really blown away by Mike’s performance—I think it’s his best one ever.” 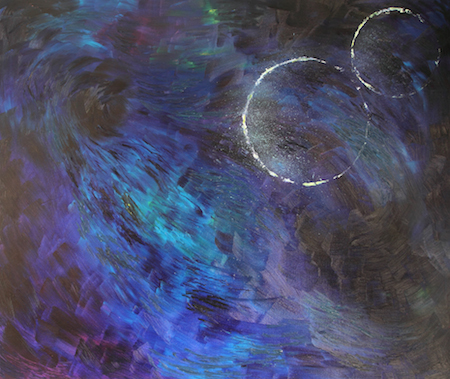 Myers’ description is apt: Concerto for Double Moon, conceived and written by guitarist Jeff Zampillo and released digitally late last year, manages to recall dreamy progressive rock from the ’70s while incorporating hard-hitting tones and of-the-moment ideas. The project began in 2013, after Zampillo left the band Exotic Animal Petting Zoo and started shedding his ambitious new material with Mirro in the drummer’s basement, just blocks from his own home in Crown Point, Indiana. Mirro and Zampillo had met around a year earlier when they were invited by guitarist Marco Villarreal to a jam at the local club Zodiac Lounge.

“We linked up a lot,” Zampillo says of that first encounter with Mirro, “and it was cool because he listened. There was this chemistry, and you want to hold on to that.” Zampillo’s dynamic new music wouldn’t quite have fit with either player’s former group. “Mike had come from this jam band that’s all shiny happy people, and I’d just got out of this band that was dark and in your face and pissed off at the world,” the guitarist explains. “That combination was what we were looking for, I guess.”

Double Moon features sax and strings, distorted riffs and hushed moments, flurries of composed notes and expansive improvised solos; its many odd time signatures demand focus from the players. Yet, Zampillo says, “I think Mike and I honestly practiced like three hours, altogether, for the whole record. Did you ever see the movie Ed Wood? Our approach can be summed up from this scene: Ed Wood gets this half-assed shot, and it looks really bad, but he’s like, ‘Perfect!’ That’s how Mike and I would be about everything. The rest of the time we just hung out and got to know each other.”

Listening to Mirro’s super-sturdy, I-can-play-anything-you-throw-at-me drumming, you’d assume he spent long days shedding Double Moon, and it certainly doesn’t sound like the work of a guy who’d left the industry a decade earlier. “His performance is brash, bold, beautiful, and gentle,” Myers says. “He’s holding down the fort at times, and he’s also playing with the soloists and playing something very appropriate, all the way down to the fills. The rhythms are menacing and twisted and intense.

“He had a real natural ability to play a lot of different styles,” Myers adds. “He didn’t go to school for that; he just knew it. Whatever Mike was feeling at that time, he would do it and he would succeed.” On “Icarian Games,” Mirro nails intense snare singles in unison with Zampillo, blazes intensely behind a furious guitar solo, and then settles into a tasty funk beat. By contrast, on “An Atlas of Oceanic Coves” he breathes deeply, meditating on a slow, airy groove before injecting an infusion of fills, ever longer as they go, over a fadeout of strings and guitar.

“He had this ability to think in terms of less-obvious subdivisions,” Zampillo says. “If I threw him something in seven, there are a lot of drummers that will just outline seven: ‘Hey, I’m playing in seven.’ Mike would bring it down to further subdivisions, like the 32nd note. He made the playing less angular, so it flowed more. It didn’t even sound like an odd meter. And he understood how to read the music and know where to place certain accents. There was never anything he played where I was like, ‘No, man, that’s not gonna work.’”

It’s heartbreaking that Mirro never got to see the completion of the album, or even play on the closing track, which Zampillo wrote for him as a solo vehicle; on that tune drums are handled, very ably, by Michael Shell. “We were getting ready to start writing for the second album, even though the first one wasn’t fully tracked,” Zampillo recalls. “Mike and I wanted to keep the creativity going. In an hour we could get so much done. We just had that vibe.”

“Mike was a great guy and down to earth,” Myers concludes, discussing how he and Mirro formed a friendship within the Umphrey’s McGee family. “He was a very selfless person. He was a character; he was kind of eccentric and said some pretty goofy things at awkward times, kind of like a lot of drummers do. [laughs] I bonded with him there.

“I always admired his talent. It was a clean, flawless approach with a vicious spirit. I’m still playing some of Mike’s parts note for note.”

Go to thepneumatictransit.bandcamp.com  to stream or purchase Concerto for Double Moon.

This article originally ran in the November 2016 issue of Modern Drummer magazine.