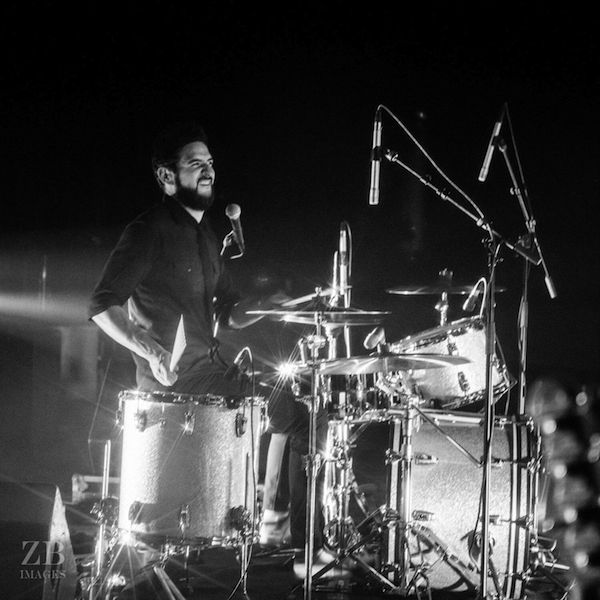 Hello, MD readers! Marc Cazorla of the band the Record Company. We are a Los Angeles-based trio that plays rock ’n’ roll inspired by some of our favorite artists from a multitude of genres.

Our debut album Give It Back To You came out last February and was just nominated for a Grammy for Best Contemporary Blues Album. This is an amazing honor and we are honestly as much surprised as we are excited. The entire record was recorded in our bass player’s living room and the drums I played were found at a garage sale for $150—and although we think they might be late ’60s Ludwig’s, no one can really tell.

Much of the hardware was rusted out and actual parts would fall off while recording, but those drums traveled all over the country with me several times. I finally picked up a new set of Ludwig silver sparkle Classic Maples that sound great and are a lot more durable, especially for the forty-two-city tour that we just concluded.

Part of the recording process for me was learning how to play those drums so they would end up sounding the best given our junk microphones and limited recording capacity. In many cases, this meant only being able to play one little corner of the floor tom because the warping in the shell didn’t sound very good when the drum was hit in the middle. I also ended up using a Zildjian Constantinople 16” crash as the ride cymbal because our overhead mics could not handle a normal ride. This all actually served as an unexpected benefit because it really made us focus on what served the song best as opposed to trying to fit in as many fills as possible.

The great “song drummers,” most notably Ringo, have always been great inspirations to me and I tried to apply that type of approach to our album. Most songs were recorded in one or two takes, done live with the band, but there was no pressure because we like imperfection. In a few cases, we tried to go back later and recut something but it was impossible to capture that magic that happens when a song is just being born. So what ended up on the record is essentially one of the first times these songs were actually played.

We are very groove-driven so it makes being a drummer in this band very enjoyable. We are always looking for new ways to take a relatively simple concept (drums, bass, guitar) and do something different. We recently had the great thrill of playing on the TV show Late Show with Stephen Colbert and while the norm would be to play one of the singles from the album, we opted to do something that was just drums, bass, and harmonica (with vocals sung through the green bullet harmonica mic right through the same amp).

We will be hitting the road this February 2017 with another US tour, along with stops in Europe, UK, and Australia. Come check out a show if you can and thanks to Modern Drummer for allowing me to share a few thoughts!