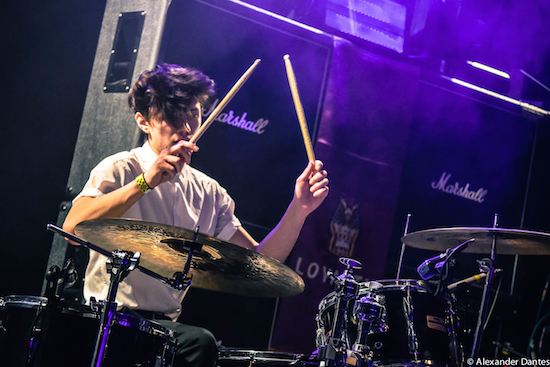 Hey MD! I’m Maxx Morando, drummer of the Regrettes. I’m eighteen years old and have been playing drums since I was eight and joined the School of Rock in Hollywood. I met some of my bandmates there, three of whom are Sage, Genessa, and Lydia of the Regrettes. My main influences are Phil Collins, Keith Moon, and Jack Bevan.

We just finished a West Coast tour opening for the amazing band Sleigh Bells. Our debut album will be released on January 13, 2017. We’re excited that the incredible Mike Elizondo produced our record. The recording process was extremely fun and taught me so much. We recorded live, straight to tape, all in the same room, all at the same time. I was super focused on getting the best take every time as I couldn’t go back and re-do little parts. But because of this I would focus too much and start to stiffen up and not play the way I wanted. After we did a few songs, I started to loosen up, and just played how I’d play live. It taught me to just play drums like I usually would, comfortably. It brought out some really great takes.

At the moment, I’m playing a three-piece vintage Rogers 1972 kit, with a Ludwig Acrolite snare and Zildjian cymbals. I use hickory Vater 5A sticks.

I hope you enjoy our album. Thank you MD for this opportunity!