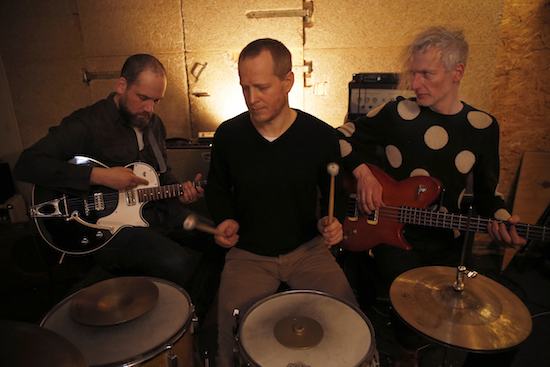 Drummer and sonic explorer Martin Brandlmayr continues to smear the increasingly blurred line between acoustic and electronic music on Radian’s newest release, On Dark Silent Off. The record, which the Vienna-based electro-acoustic pioneers released this past November 11, features Brandlmayr’s refined auditory sculptures and unique take on the drumset’s role in contemporary music. We recently spoke with the drumming trailblazer to pry into the concepts behind Radian’s newest addition to their twenty-plus years of output.

MD: You have a very unique sound and concept. What drummers or bands inspire you?

Martin: Paul Motian, Hamid Drake, Paul Lovens, Tony Buck—just to name a few of my heroes. But in general I’d say I was influenced from players of all kinds of instruments. For example, [Austrian trumpet player/improviser] Franz Hautzinger was a teacher of mine. In general Vienna’s vivid music scene of reductionism and electronic music had a big influence on me.

I learned a lot from the architecture of analog synthesizers—breaking down sounds to their basic parts as white/pink noise and waveforms. In the early Radian years, I thought of myself as something like a sequencer and the drums as a complex oscillator/effect/modulator unit. In Radian’s context, playing the drums is more like real-time programming and arranging than free-flowing playing—constructing sounds in time. How can I create white noise on the drums? How can I modulate a sound of a cymbal? Turning on and off a rattling screw on the cymbal or engaging the snares on the snare drum was like adding noise oscillators on a synth.

I also took a lot from my experience as a cello player. I played cello for eight years when I was a child. When I switched to the drums I missed the tonal possibilities of shaping the sounds—the possibilities that you have by bowing strings. So I started all this scratching and brushwork, and I searched for tonal aspects on the drums. This also brought me to all these microscopic and quiet territories where I was exploring all kinds of hidden tones and sounds.

MD: Are there any specific parts on the new record where you drew from your inspirations? 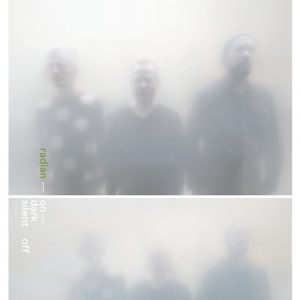 Martin: A couple of years ago we did a whole evening with 35mm live film projections. This was for the anniversary celebration of the Viennale, an international film festival in Vienna, and it happened in the Gartenbau, a beautiful, historical 800-seat movie theatre. We were playing to movies like La Jetée by Chris Marker, Outer Space by Peter Tscherkassky, a film from Ben Russell’s Trypps series, and a few others. This was a great experience and also a very long working process. But it had significant influence on the album, since at least two songs—“On Dark Silent Off” and “Scary Objects”—first appeared in this context, though in a very different form.

MD: Are there any non-musical ideas or concepts that you draw on to get your specific sounds?

Martin: For me creating a beat feels like building a sculpture. So I understand music very much in a spatial/visual concept. In early years I was very inspired by Bauhaus design, architecture, and theory. In a broader sense, architecture, visual art, and design are very important.

MD: Are there any electronics combined with your acoustic drums? Do you do any processing on your drums live?

Martin: I’m constantly recording and processing sounds from the drums, but there is no live sampling. In Radian there are samples of drums, bass, or guitars, and I’ll play these samples live through a sequencer. These sounds are usually in strict connection with what we’re playing live.

MD: Can you describe your setup? Do you place cymbals on your snare drum?

Martin: I’m playing a jazz set from the ’60s. It’s a very basic setup with a bass drum, snare, floor tom, cymbals, and hi-hat. But I’m constantly “circuit bending” the set. So I place all kinds of things on the drums like cymbals, crotales, murmurs, marbles, and pieces of cloth, or I’ll dampen and shape the tones of the kit with my hands.

Martin: We’re constantly recording sounds, and then I’ll take them to my home studio and choose small snippets to create a basic structure. We’ll meet again and play on top of them to search for more sounds that could fit. We’ll record once again, and I take those recordings and choose and place sounds on top of them again. Martin Siewert did a lot of wonderful processing on this record. He has a collection of very interesting and partly obscure outboard equipment, and it’s always a pleasure to watch him send sounds through his machines. Through recording our playing and processing, we’re creating hours and hours of sounds of which just very small parts are used. So in a way it’s always a process of creative explosion and creation and then a process of carefully choosing and placing sounds—a distillation process.

MD: How much time was spent in the studio working out tones for the new record?

MD: In your drum parts it often doesn’t sound like there’s a typical “riding” cymbal pattern that goes over a groove. Is there any concept behind this?

Martin: No conscious concept. But when I think about it, there are reasons. For me the cymbals are more of a sound generator than a rhythm instrument. So I use them more like playing a chord on a piano—putting a very strong color to the music. The wet cymbal sound creates some kind of a nebula that of course takes a lot of space in the frequency spectrum. I like to feel the dry space between the musical objects within a beat, for example, and occasionally hit the cymbals. For me it’s a matter of making a cymbal hit a special event.

MD: When you do break into more of a typical pattern, there’s such a deep sense of groove in the parts. Do you listen to any specific drummers to develop feel?

Martin: Not so much drummers in particular, but in general listening to a lot groove-based music. Listening to Prince helped, for sure.