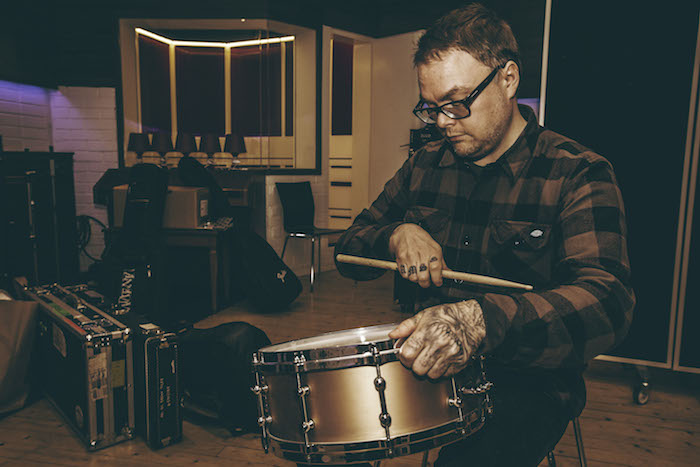 Greetings drummers! (Modern or not.) Greetings readers! (Drummers or not.) My name is Daniel Moilanen and I’m a metal drummer.

Throughout the entirety of my drumming career I’ve played different styles of metal within different genres of metal and the one thing I’ve learned is that in none of these genres has my speed or volume been as important as the silence within it all. That’s basically the essence of drumming, of course, and this knowledge doesn’t make me special, but it does make my playing interesting. Or so I’ve heard. I never was much for practicing, making me an awful motivational speaker for aspiring drummers, but everything I’ve needed to know or to do, I’ve learned.

My first hits on an actual drumkit were the intro to “Corporal Jigsore Quandary” by Carcass. This was in 1992 and I had taught myself this while air drumming with flowerpot sticks, the air kit compiled from videos on Headbangers Ball. By 1996 I’d learned the broad strokes of Cynic’s debut Focus, and by 1999 I was playing Meshuggah covers—all while blasting away in death and black metal bands.

Nothing remarkable about that, but I realized early on that I could learn to play anything given enough time and patience. This made me re-evaluate my playing, as I wouldn’t settle with just playing correctly and well. Of course, I sought technical prowess, but that wasn’t the challenge.

My focus turned toward agility and acuity, being able to easily incorporate what I’d learned wherever I played. I’m not advocating playing blast beats everywhere, but if I could channel the “spirit,” if you will, of Napalm Death’s Mick Harris and Cynic’s Sean Reinert when playing post-punk, what could that do for my playing? A lot. I became a fusion-y doom drummer, a doomy-grindcore drummer, and an emotionless machine-like progressive rock drummer.

Today I play in a band called Katatonia, of which I was a great fan of as a kid. The band gives me freedom to sound like myself while pushing me towards more of that self and is a band with like-minded individuals who all value freedom and natural progression. They’ve always defied genres while defining and refining them. In twenty-five years of existence, the band has treaded a path from romantic black metal through cold shoegazey rock to progressive metal and further to where we are now, in a pot boiling with all that we’ve learned and been through. This is the band with whom I just released the album of my career, The Fall of Hearts, on Peaceville.

Céline once wrote: “Life is filigree work…What is written clearly is not worth much; it’s the transparency that counts.” Though not a musician, he still hit the nail on the head.

Today I focus on breathing and balance instead of conforming to a sound. Today I listen to the sounds I make and for the sounds I don’t. Today I’m more of a musician than I’ve ever been.

Stay in school. And stay tuned friends, as Katatonia will be returning to the US soon.