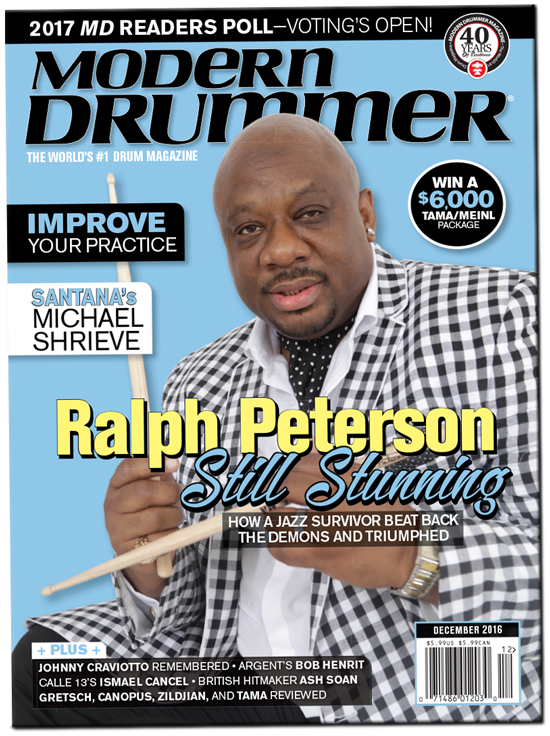 “I’m a better player. My energy is used to uplift the people I play with now, instead of beating them down in some testosterone-induced display of musical machismo.”

The jazz drummer and educator was chuckling as he said those words, but there’s a seriousness between the lines that tells of hard battles, and sweet successes. ~ by Ken Micallef

Cast your vote in the drumming world’s most prestigious ballot!

At twenty, Santana’s “classic lineup” drummer cut an image at Woodstock that still de fines the era. But the past is the past…or is it? ~ by Jeff Potter

That’s him playing the oddball, contagious beat on Argent’s perennial FM fave, “Hold Your Head Up.” But it’s just the tip of the iceberg. ~ by Will Romano

Whether arena-rocking Halsey or driving Ryan Adams’ 1989 album, he never loses his voice. ~ by Ilya Stemkovsky

While the world-renowned Puerto Rican group Calle 13 takes a breather, its drummer explores the unknown with singer iLe. ~ by Ilya Stemkovsky

Exercises for Control ~ by Bill Bachman

Concepts – Are You Playing the Drums?

Or Are the Drums Playing You? ~ by Russ Miller

AN EDITOR’S OVERVIEW – Tell Them How Good You Are…

On Tour with the Pretty Reckless and John Brown’s Body, new albums by Blonde Redhead and Dance Gavin Dance, and more

Mind Matters: Playing in a Band or Solo? ~ by Bernie Schallehn

Kit of the Month – Envirodrum

Contest – Win an Incredible Prize Package From Tama and Meinl valued over $6,000!

Get the December issue!