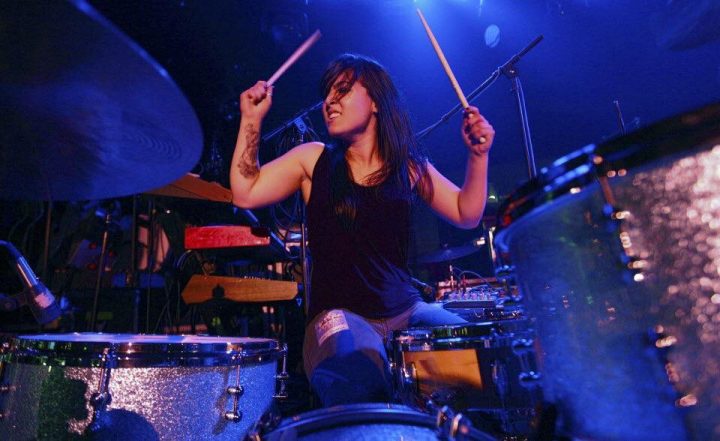 Hey everyone! I’m Caitlin Kalafus. I had the privilege of writing a blog for Modern Drummer about six years ago and I’m so honored to be here saying hello again!

The last time I checked in I was in a band called Kicking Daisies with my sister Carly on bass. We played gigs around the country, appeared on TV in commercials and shows, released an EP nationally through Walmart, and had a song that charted on Billboard. It was a really great education. I learned a lot about performing in front of huge crowds, recording in studios, living on the road, and showcasing for major labels.

When that ended my sister and I started a band called Like Violet. We recorded an EP, played a ton of shows throughout NYC, Philly, and the Northeast, and opened for some of my favorite bands including MuteMath (I love Darren King!), Sublime, and Cypress Hill. I’ve also been jumping into the jam circuit a bit with a side project called CK3—a totally loose and open band where I get to explore my jazz, blues, funk, and experimental chops. It definitely keeps me on my toes and pushes me to learn more.

While doing all that, I’ve been attending Lesley University College of Art and Design in Boston studying graphic design. I wanted to learn something new that would go hand in hand with my musical career and still allow me to explore my creative side. It also gave me an opportunity to travel through Europe and spend some time in London.

So here I am now, six years later, twenty-three years old and gearing up for a summer of incredible music playing the Vans Warped Tour with the Brooklyn based band, Mother Feather. Their incredible drummer, Gunnar Olsen, had prior commitments, which landed me a spot behind kit. I’m looking forward to sharing the stage with such a hot and entertaining band. They’re touring in support of their first full-length album released by Metal Blade Records and I have to say, I couldn’t be more excited for this opportunity!

The videos posted below will give you a snapshot of what it will be like this summer. If you go to Warped Tour check us out and definitely come say hi to me. I’d love to meet all of you! Thanks for reading and I’ll see you on the road somewhere across America! Peace and love.

Here’s a video of me with CK3 playing “Moby Dick” by Led Zeppelin at Okemo Mountain’s Sugar Daze: