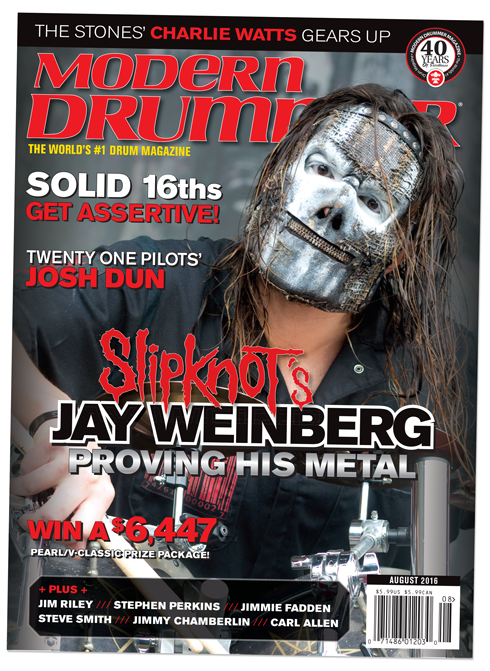 “They didn’t want a copycat, so I needed to play it in my own way. I can’t play it any other way.”

Taking the place of a certified rock icon is tough enough. It’s a whole other thing when that musician is someone you’ve modeled yourself after since the day you picked up a drumstick. – by Patrick Berkery

He’s become the toast of Prog Town due to his work with Steven Wilson. But that’s only one part of this performer, clinician, writer, producer, and remix master’s story. – by Will Romano

THE HISTORY OF THE DRUMMER BOY

Twenty One Pilots’ percussive half finds therapy at the kit. – by Willie Rose

GET GOOD: STAYING SAFE ON TOUR

It’s a jungle out there. But follow these common-sense tips and you’ll be happily swinging on the road like a monkey in a tree. – by Kim Kicks

WHAT DO YOU KNOW ABOUT…JOE BUTLER

The singing drummer with the Lovin’ Spoonful was at the nexus of the legendary Greenwich Village folk-pop convergence.

Purson’s drummer has developed a hybrid post-punk/psych-prog style that ts his band’s sound like a glove. – by Ken Micallef

The Alt-Rocker, Jazz Artist, and Tech CEO on Finding His Sound on Sakae Drums – by Nate Bauman

Collector’s Corner – The Drumset That Launched an Invasion

AN EDITOR’S OVERVIEW – Worth Fighting For

The Damned, Moon Hooch, Jane’s Addiction, Panic! at the Disco, and more

Eric Dolphy’s Out to Lunch