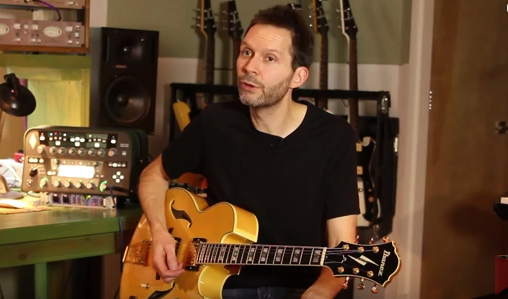 Mr. Big founder and ex-Racer X guitarist Paul Gilbert is releasing his seventeenth solo album today, I Can Destroy, featuring Thomas Lang on drums. Gilbert has performed in a number of musical projects over the years with Mike Portnoy, including the drummer’s Beatles tribute group Yellow Matter Custard, which played the Modern Drummer Festival in 2003. Gilbert talks about those gigs in the brand-new Episode 18 of his “Scarified” video series; we asked him to expand on the subject here.

“Over the years,” says Gilbert, “Mike has invited me to play guitar in all four of his tribute bands: Yellow Matter Custard (the Beatles), Hammer of the Gods (Led Zeppelin), Cygnus and the Sea Monsters (Rush), and Amazing Journey (the Who.) Mike not only played the drums with love, power, and authenticity, but also worked hard behind the scenes organizing the set lists, the T-shirt designs, and the countless other details that go with putting rock shows together.

“Mike was a great tour manager,” Paul continues, “and that’s not a skill to be underappreciated. From a drumming standpoint, Mike gave me a new appreciation of Keith Moon. Keith’s playing was often rough around the edges, and some drummers might have tried to clean up the parts with sophisticated and dainty technique. Mike set up his kit with a crash cymbal where the hi-hat usually goes—like Keith used to do—and struck the perfect balance of drumming insanity and staying with the song arrangements. Mike can certainly play with detail and finesse, but he also has the right instincts about when to ‘paint with a big brush.’”