Claus Hessler Playing on “The Axis” With Bassist Stefan Hergenröder

In this video, German drummer/educator Claus Hessler, who’s featured in the June 2016 issue of Modern Drummer magazine, performs the song “The Axis” with his duo. “This is my project with German bass player Stefan Hergenröder,” says Hessler. “The tune is called ‘The Axis’ and is the follow-up track for ‘Löwenzahn,’ which means ‘dandelion’ or ‘lion’s tooth’ in English. We also perform this song live with no additional dubbing/sequences. Stefan uses a delay pedal to create a unique sound. Throughout the song there are some structures in five that don’t appear in a very obvious way. They create nice tension in the B section as well as in the drum feature that precedes it.

“When I’m performing this song by myself, I use a version of the track that has just some additional synth pads and percussive add-ons. There is no click as I am performing, which can be challenging. But when you really know the music, it’s much more fun to play without a click track. The cowbell interaction at the end of the tune adds some more tonality to the drum part.”

Read more about Claus in the June 2016 issue of Modern Drummer,  which is available here. 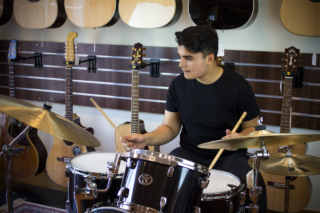 On The Beat with Adrian Varady of Guitarist and Composer Andreas Varady: Talks Gear, Influences, and New Album