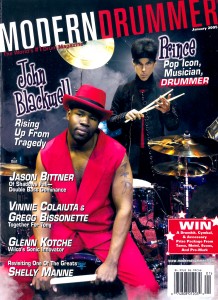 Prince’s massive appeal crossed genres and generations, and besides his singing, songwriting, and production prowess, the influential artist was adept on many instruments, including the drums. In fact, Prince and his longtime drummer John Blackwell appeared on the cover of Modern Drummer in January of 2005 (back issue available here), soon after the release of the Musicology album, which, like many of Prince’s records, featured him on drums on a number of tracks. Here we present our entire interview with Prince, which was conducted by MD associate editor Billy Amendola.

MD: When did you first start playing drums?

Prince: I started when I was thirteen years old. I would play on cardboard boxes. I’d use the flaps for dexterity and different sounds. I wouldn’t play drums in front of anyone until I felt I was good enough.

In school everyone wanted to play the drums. As soon as the drum chair was empty, someone would get behind the kit and play. Where I come from, if your beat was wack, you’d be made fun of. [laughs]

MD: Who were some of your drumming influences growing up?

Prince: I’ve never patterned myself after anyone. But my biggest influence was Morris Day [of the Time]. Besides Morris, I’d watch local musicians. I never went to a concert until I was older. I saw James Brown and loved him as an entertainer. I saw the whole package.

MD: Did you ever take lessons?

MD: What would you practice? Would you play along to records?

Prince: No. I’d play while singing songs in my head, or I’d put on the radio and play along to anything that came on. I would go from one end of the dial to the other. I’d play all kinds of music. When you’re thirteen years old, you don’t know about any formats. That’s something society teaches you as you get older.

MD: What makes a drummer funky to you?

Prince: Their sense of timing and spirit—and when their ego doesn’t ruin their playing. I don’t like it when a drummer plays too much and he or she isn’t listening. Some guys can have a great foot but no hands—or great hands but no foot. Listen to the song “Funky Drummer.” The drummer [Clyde Stubblefield] plays the same thing over and over, and that groove just locks you in.

MD: What qualities do you look for in a drummer when you’re playing bass?

Prince: As a bassist, I listen closely to the hi-hat. I don’t necessarily follow the kick. I like to create the pulse of the foot with my bass.

MD: How about as a producer?

Prince: And a producer, song arrangement is very important. Some drummers can play anything, some can’t. Some can play different styles, but not all well. It helps for the drummer to have a wide vocabulary in the studio.

MD: How important are the drum sounds when you’re writing a song?

Prince: Sometimes not at all. I always record the drums first—that’s real important. I like to record fast. Sometimes the mic’s aren’t perfectly placed or the tuning isn’t right. It’s just a feel thing. One of my strengths is, when I’m playing it all myself, I can make it sound like a total band when I’m done.

Some of the greatest records have horrible drum sounds. Listen to “Brick House” [by the Commodores]. The toms sound horrible. Or Stevie Wonder, who’s a great drummer. His drums sound terrible. [laughs] But when he plays…I watched him record drums on his latest record, and his internal rhythm is impeccable. It’s something you can’t buy or be taught.

Prince: No. The Linn drum machine is my favorite, when used with a real drummer. I don’t like a drum machine pattern by itself, playing the same thing over and over. It’s not human, and we’re human beings. What happens with a drum machine is, after a certain point you stop listening to it. You don’t hear it, because there’s no emotion. It’s too perfect, and in reality, nothing is perfect. I play whatever I have to on top, to get it to groove and feel alive.

MD: Are there any songs from the new record that were written around a beat or groove?

MD: Did you and John [Blackwell] discuss drumming?

Prince: Not really. I just try to stop him from listening to other drummers. [laughs] Actually, I think John is one of the greatest.

MD: What is it that you like about his playing?

Prince: His personality. John’s humble enough to take direction. His ego never gets in the way of his playing. When John first started with me, he was the student and I was the teacher. I had the blessing of being able to show him things. I think it’s time for John’s rite of passage. It’s time for him to go out and be the teacher. John and I studied the Bible together, and one thing I think is important as I watch his spiritual development is I see him growing as an individual. I see it in him, and that will affect his music.

MD: Any favorite tracks of John’s?

Prince: Not any one song. It’s the full body of his recorded work.

MD: And of yours?

Prince: I remember the experience more than any particular track. I do recall that I liked the drumming on “Let’s Work,” the long version that’s never been released. I was playing drums, and in the middle where it’s straight foot, Morris and I switched right in the middle of the recording, and he finished out the track.

MD: How was it decided who would play drums on what tracks on Musicology?

Prince: Availability. The business has taught us to disperse and move. It’s hard to keep your band in your hometown. If John lived closer, I’d have him on a lot more.