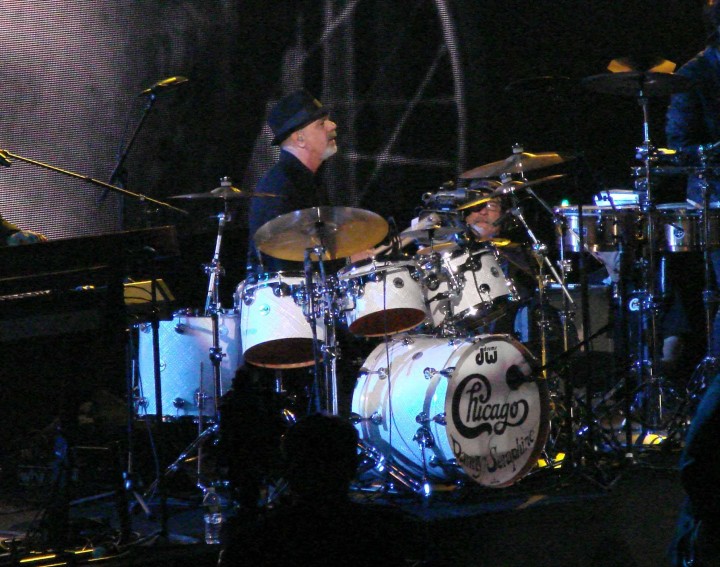 Pioneering jazz-rock drummer/composer/author and founding member of the Grammy award-winning rock group, Chicago, Danny Seraphine was officially inducted into the Rock and Roll Hall of Fame on Friday, April 8 at Brooklyn’s Barclays Center.

Worldwide, Chicago has sold in excess of 122 million albums and has earned an estimated twenty-two gold, eighteen platinum, and eight multi-platinum albums. A long-time endorser of DW Drums, pedals, and hardware, Seraphine played a California Custom Shop Collector’s series drumset in a new, retro-inspired White Crystal finish at the induction ceremony. Seraphine designed the kit with DW executive vice president and drum designer, John Good, to emulate the sets he played in the ’70s. The kit, which includes a vintage-style “rail” tom mount and single-headed toms, “Looks and feels like the original, only better,” commented Seraphine.

“This is a career milestone for Danny and we wanted to make him something really special to commemorate the occasion. He’s been such an important part of DW’s history as a company, and we’re immensely proud to have been a small part of Chicago’s amazing journey,” remarked Good.

“Danny is truly a music industry legend,” said Drum Workshop Inc. founder, Don Lombardi. “I can’t say enough about his impact on the drumming community and the entire DW family congratulates him on his induction into the Rock and Roll Hall of Fame.”

The Rock and Roll Hall of Fame induction ceremony and performances will air on HBO on April 30, 2016.