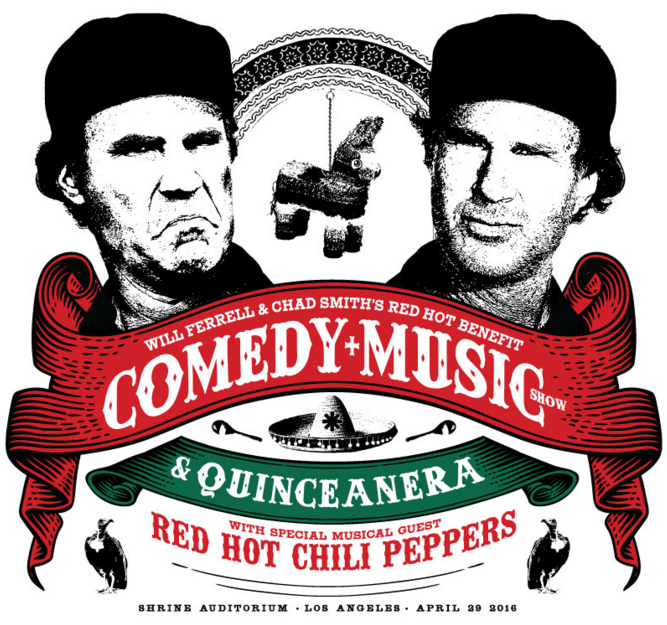 Comedy icon Will Ferrell and rock superstar Chad Smith of Red Hot Chili Peppers are throwing a party—a quinceanera party to be exact. The Red Hot Benefit Comedy plus Music Show and Quinceanera, hosted by Ferrell with his Funny Or Die team and musically curated by Smith, will be a star-studded extravaganza held at 8 pm on Friday, April 29 at the historic Shrine Auditorium in downtown Los Angeles. The show will include performances from the Red Hot Chili Peppers plus other musical acts and comedy from the hottest comedians.

“I have only one great regret in life and it’s that I never actually celebrated my quinceanera,” said Ferrell. “I’d like to think it was just a simple oversight by my mother, but there has been a void inside me for many years. Growing up on the mean streets of Irvine, California, I have vivid memories of all my friends celebrating their quinceaneras. Well, on April 29 at the Shrine Auditorium, with Red Hot Chili Peppers and a bunch of other really talented comedians and musicians by my side, we are going to right that wrong, and everyone is invited.”

Ferrell and Smith, who bear a striking resemblance to each other, first collaborated during a Reddit challenge that culminated in the famous drum off on the Tonight Show with Jimmy Fallon in May of 2014. The stunt raised nearly half-a-million dollars for their respective charities along the way.

“We had so much fun with Will on the drum off and ultimately getting the entire band together to participate on the Tonight Show,” said Smith. “So much goodwill came out of one silly joke. We’ve been trying to find another way to get together and do some more good for our respective causes and I think we have found it. I’m going to check with my own mother, because I don’t recall any family photos of my own quinceanera either.”

For Ferrell the beneficiary is Cancer for College, the charity started by his USC fraternity brother Craig Pollard over twenty years ago. The charity has granted over $2 million while helping more than 1,000 cancer survivors realize their dream of a college education. For Smith it’s the Silverlake Conservatory of Music, a nonprofit organization founded by Chad’s Red Hot Chili Peppers bandmate and bass player Flea, which strives to address the decrease in arts education in schools while providing cultural enrichment to the community by offering private music lessons at a reasonable cost, granting scholarships to children in need, and providing free lessons and instruments.

All ticket information and links are available at http://www.funnyordie.com/redhotbenefit.