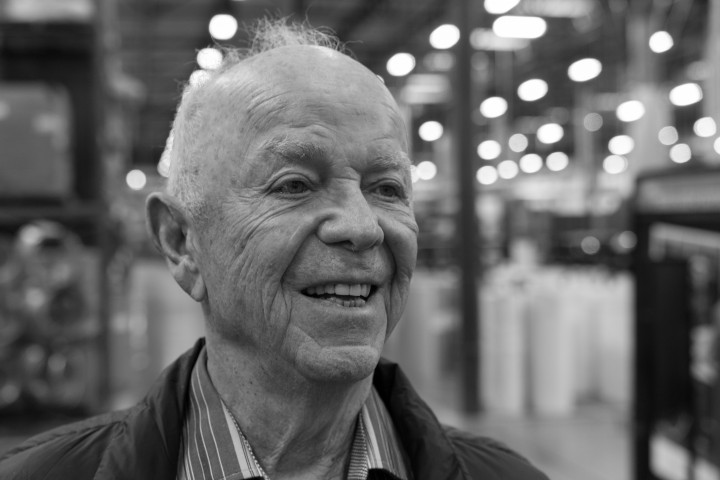 This excerpt is taken from the complete article that appears in the May 2016 issue, which is available here.

Remo is one of the most well-known brands in the music industry. Its logo can be found in concert halls, school band rooms, recording studios, late-night venues, and even therapy sessions and hospital rooms. Remo Belli, founder of Remo, Inc., got his start in music by sneaking into small Indiana clubs as a child to watch his favorite drummers play. He was gigging by the time he was sixteen, but his career took a detour when he entered the Navy as World War II was ending.

After his time in the military, Belli moved to Hollywood and began touring with different acts. He also partnered with a friend and opened Drum City. The shop would serve the needs of the booming Hollywood music scene, including drum greats Buddy Rich, Shelly Manne, and Jack Sperling. But then something happened that would forever change Remo Belli’s life: the invention of the synthetic resin known as Mylar. Belli, now eighty-eight, recently sat down with Modern Drummer to tell his story.

MD: When did your love for music begin?

Belli: I grew up in Mishawaka, Indiana, and I had an uncle that played trumpet at an Italian club. My parents went to the club, and I would hang out and listen to the drummer. The drums attracted me, so I told my dad I wanted to play them. You wouldn’t believe the drumset my uncle helped my parents buy me. I think it was a 26” bass drum with a hanging Chinese tom and cymbal. My first snare was a Gretsch, and we paid fifty cents a week for it.

My first experience playing in a collective group was in school, when I was twelve years old. When I went into high school, World War II broke out. All the local musicians were drafted, so our high school jazz band was the only group left. We entertained the workers. Sometimes we’d play from seven o’clock in the morning until we went to school. We played victory shifts when they were done, too. By age sixteen, I was already gigging.

There was a local drummer named Ralph Kester. He played at the two spaghetti joints in town. My mom worked at one, and my aunt worked at the other. So I used to go to the window and watch him play the drumset. He taught me the spang-a-lang brush pattern.

By the time I was a senior, I would frequently hang in Chicago for the weekend. My friends and I would sleep at a dumpy hotel and go listen to jazz.

MD: You spent some time in the Navy, right?

Belli: That’s an interesting story. The Great Lakes naval station was in Chicago. One of the guys I used to gig with in South Bend joined the Navy and was in charge of the band in Chicago. He told me, “Join the Navy, because you’re going to get drafted anyway. Then you can be in the band with me.” So I went to Indianapolis to take the physical and joined the Navy. Everything went great, with one exception: Great Lakes was quarantined. So I went to the naval training station in New York. The first thing I did was find the band barracks and introduce myself.

They couldn’t get me in the band, but they got me doing other things for them. When I finished with boot camp, I was sent to Newport, Rhode Island. I found the band barracks there, and introduced myself to them. There was a gig that night, so they said that if I could get there they would give me a chance to try out. The next day, I was peeling potatoes in the kitchen when they walked in with papers that said I was transferred to the band.

The war ended while I was in boot camp. During my stay in the band, I literally did everything. I was the principal drummer, and we played at all the bases. I played bass drum in the marching band, and I played timpani in the concert band. I eventually went to my chief band director and asked if I could get out to pursue music. About a month later, I was served with papers for an honorable discharge. The director wrote me a check for twenty-five dollars and told me to go to New York to pursue my dream.

For the complete interview, check out the May 2016 issue, which is available here.