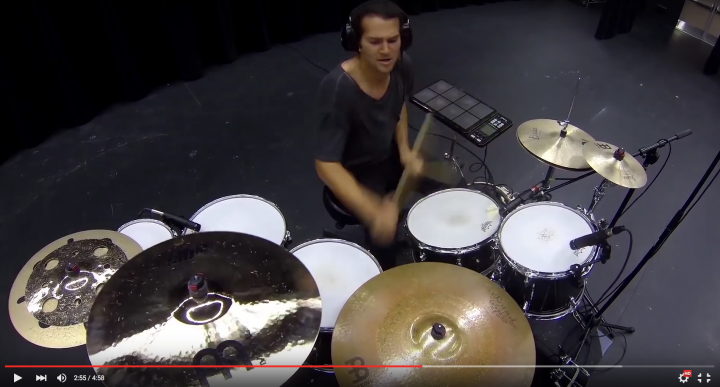 For drummers who’ve learned to thrive in the YouTube era, the creation of fresh, sharable content that will grab viewers’ attention often enough to keep their buzz buzzing is a crucial piece of the puzzle. Night Verses’ quirky drummer, Aric Improta, is certainly keeping his name on the lips of drumming fans with his “Drum Chain: 9 Drummers 1 Song” video (see below), which has amassed more than 350,000 views since first being posted last August.

“The objective,” Improta says, “was for each drummer to compose his own section of a song. The only rules were that they would get eighteen bars at 140 BPM and they’d have to match a similar fill at the end. Once they sent me their compositions, I tried to tie it together and order it in a way that felt cohesive. I then sent the full track to Nick [De Pirro] and Reilly [Herrera] of Night Verses to compose a song around it. This video is the final result. None of the drummers were aware of what anyone else was playing when they wrote their sections.”

The concept of this studio project actually began on the road? “We did two years of touring after our first album came out,” Improta explains. “That’s something that I’d been looking forward to, but it was also kind of hard to accept that I wouldn’t get to practice the same amount that I’m used to. So I thought, ‘How can I benefit from [being on tour] in a way that I couldn’t at home?’ One of the things I did was the ‘Drums Thru 17 Countries + 32 States in 2 Min’ video. The other thing was meeting all these great musicians and trying to find something to do that would put them all together.”

In a gesture that’s becoming more common in the YouTube age, Improta devised a way to generate buzz for himself and his band and also draw attention to drummers that he feels are sometimes skipped over by the greater music media. “It seems like right now the drumming spotlight has been put on specific styles and groups of players, like guys with a gospel background or the Djent world,” Improta says. “There’s nothing wrong with that, but I’m meeting these amazing drummers that don’t really have a place in that world, like people that have more of a punk or hardcore background. I kind of wanted to do something that focused on their styles. Everybody that I included in the video is pretty unique from a lot of the drummers getting attention right now. I really wanted to do something that forced us into an awkwardly creative place by having to mix the style from the drummer of Letlive to the drummer from HRVRD, for example. It was a purposeful limitation to try and build something more creative than we would have [been able to] without it.”

Featuring both up-and-coming and established players that Improta met while touring in support of Night Verses’ 2013 album, Lift Your Existence, the video captures not only a taste of each participant’s musical identity, but the reality of their practice or rehearsal spaces. These intimate peeks into each drummer’s life off stage and the variety of their situations add to the uniqueness of the project.

In addition to Improta, the featured drummers include Anup Sastry of Monuments, Mike Ieradi of Protest the Hero, Matthew Lynch of Trioscapes, Loniel Robinson of Letlive, Billy Rymer of Dillinger Escape Plan, Garrett Henritz of HRVRD and Fol Chen, Alex Bent of Battlecross and Arkaik, and Joseph Arrington of A Lot Like Birds and Sianvar. The unique styles, setups, and sounds that each player brings to the table help elevate “Drum Chain” well beyond simply a cool idea. “The main focus was to deliver the drummers’ personalities,” says Improta. “I made an explanation video that I sent to everybody, In which I said, ‘I want you to write what you would want to write in a song. Don’t shed the whole time. I don’t want this to just be a competition.’ The comments are going to take it there anyway—but I wanted the players to make it a song and have fun. We’re all in pretty techy bands, so I didn’t want them to feel like they just had to play pocket or anything, but I encouraged them to find balance between showing their personality as a drummer and just playing all of their chops.”

Improta’s Night Verses recently finished tracking its a full-length album with veteran producer Ross Robinson. Regarding the experience of working with the famously non-traditional and sometimes intimidating producer, Improta says, “That was crazy, because it was such an emphasis on a different side of drumming than I’ve ever focused on while recording. He was all about attack. I didn’t use a click, and there was no quantizing whatsoever. It was insane. I went in expecting it, but I didn’t know how far it was going to be taken. Because of the bands that we love and what we believe in, and the music that we liked growing up, it just made sense to make the record this way this time. I’m not saying that all records should be made this way or that all of our records will [always] be made this way, but it was the right thing to do right now.

“We would go in and play the songs in this little room,” Aric continues. “Ross had us practice in this small room that we could barely fit into, like smaller than my bedroom. It was the end of the summer, but it was super hot. There was no air conditioning, and he was in there with us. We’d play for a few hours, just jamming through and restructuring. Then we’d talk about what the song was about and I’d have to pull out something that I related to it. He said, ‘You need to think about this. I can’t have you think about drumming for the whole performance. You need to mess up, because I want to pick things that were improvised and put them in. If I see you thinking or the attacks feel hesitant, we’re going to stop and do it over.’

“So I did it one hundred percent. There were times when a song would start and throw a fist full of quarters at me without me knowing! It was crazy stuff. But he’s made most of my favorite records—that’s no exaggeration. I think it would have been harder to trust another producer like that, but I just went in thinking that the point of this experience is to learn. I think sometimes what gets boring to me when listening to drummers is when it’s been sample-replaced and quantized. Not that there’s anything wrong with that, it just loses its personality to a certain extent.”