Stephen Chopek (John Mayer, Charlie Hunter) recently released a solo album, Things Moving on Their Own Together. Modern Drummer caught up with the him to get the details.

MD: The drumming, guitar, and vocals on Things Moving on Their Own Together are cool without drawing undue attention to themselves. 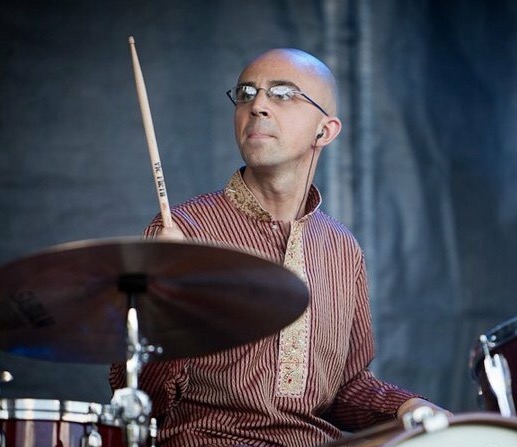 Stephen: I approached the songwriting not in terms of any particular instrument, but just for the song’s sake. Everything goes to serve the song, rather than the song being a vehicle to highlight some particular instrument that I’ve been playing or have just recently started playing.

MD: How did you separate Chopek the songwriter from Chopek the drummer?

Stephen: They serve each other, so I let them shake hands. I debated for a while whether to have another name for the songwriter or band, as opposed to Stephen Chopek the drummer, but I decided against that because it’s all the same person. They’re both extensions of me. I wanted to mix it all up. And plus, it’s difficult to come up with a good band name. [laughs] I feel more exposed as a songwriter than as a drummer, so I felt I was going all in here.

MD: How did you produce yourself?

Stephen: For this record I wrote all the songs without any drum pattern in mind. That created an interesting situation in the studio, because I was able to hear the songs with a fresh perspective. I’d lay down the scratch track with guitar and vocals, and then sit down behind the drums as if I was hearing the song for the first time.

None of the drums were premeditated. It was as if I were called in to play on the session, but the session happened to be my own. That was by design. I wanted to stay open to the process. When I laid down the drums and other instruments, the songs took shape and different arrangement ideas happened, and I went with them. It was fun.

MD: What kind of gear were you using?

Stephen: It was a combination of things. The studio had some vintage drums and cymbals, and I used mostly those.

Interview by Ilya Stemkovsky. Photo by Mike Wren. For more on Stephen Chopek, go to stephenchopek.com. Things Moving on Their Own Together is available at stephenchopek.bandcamp.com.