Chart-topping metal band Disturbed has returned from a four-year hiatus this past August 21 with the Kevin Churko–produced album Immortalized. We caught up with drummer Mike Wengren as he was prepping for the band’s first show since 2011 at Chicago’s House of Blues.

MD: So while the band’s roots are in Chicago, you currently live outside Milwaukee, and the band is a bit scattered around the country. How did the writing and recording process work for this new record?

Mike: The last few records we decided to send files back and forth for writing and sometimes for recording. What we found was after our hiatus, once we got to talking about getting back to writing, we decided that worked and was great, but part of our magic and chemistry happens when we’re in a room together. I think we were missing part of the initial chemistry, when there’s that instant energy that you can feel or not feel. It’s hard to replicate that if you’re not in the room together.

We decided if we’re gonna do this, we’re going back to how this was in the beginning, and with us living in different states that made it challenging. I’m only two hours north of [guitarist] Danny [Donegan] in Chicago, but [vocalist] David [Draiman] lives in Texas, so we’d all meet at Danny’s home studio and just start jamming. We’re all very different individuals, and what we bring to the table and how we feed off each other is part of the magic of this band, and we wanted to go back to that and be re-inspired in that way.

MD: What was it like working with producer Kevin Churko for the first time?

Mike: It was awesome to finally have someone else in the room who understood me from a drummer’s perspective. Danny and David and I are like brothers, but they don’t always understand what it’s like from a feeling perspective to play something as a drummer. Kevin started his career as a drummer, so it was very easy to communicate with him. It was awesome from both a performance aspect and a sonic aspect; I’ve never been prouder of the tones we were able to get on a record.

MD: What kit did you track with?

In the past, when we’d gear up for a tour or a recording, I could reach out to my endorsers and ask for gear, but this time around we weren’t even telling some of our family and friends. I still have every kit I’ve ever owned and one of my best, most consistent sounding kits is my Pearl Master customs that I used on our second album Believe. It’s stood the test of time, it’s easy to throw up and get really great tones out of it right off the bat. During Disturbed’s hiatus I played in another band called Fight or Flight and used the same drums on that record. So for this record I just grabbed the same drums from storage, got them to Las Vegas, and hammered away on them. I haven’t changed anything in my cymbal setup since about 2011, when we were last touring.

MD: Did you make use of any triggers or electronics in your recording or live rig?

Mike: There’s some stuff we’ve gone ahead and programmed, and I’ll probably trigger that stuff live, but as of now [mid-July, 2015] we haven’t played the new songs as a band in rehearsal with a PA yet, so as we speak we’re definitely in the throes of prepping for the first show and the next tour.

MD: Any special snares for this record?

Mike: I have a collection of snares I always bring to the studio, and Kevin, being a drummer, also had a collection of his own gear, and we ended up going with his classic Black Beauty a lot. I have one myself but it’s a more recent production model, and we compared them and his beat mine out so we went with that.

MD: Disturbed took a four-year hiatus. Did you play in any other projects during that time besides Fight or Flight?

Mike: Not really, and Fight or Flight was a bit short-lived as my wife was pregnant and I had to get home and be there for the family. Other than being busy with Disturbed this last year, my son is now fourteen months and I’ve got a five-year-old daughter. I’m kind of one track minded—when I get involved in something I’m all or nothing, I can’t really juggle lots of projects.

MD: Can you cite any specific drumming influences on this record? Any particular recordings you’ve been checking out or revisiting?

Mike: You know what, I’ve been a little bit out of the loop. I haven’t paid much attention to the new stuff and I don’t really listen to the radio much.

One pretty awesome thing, though—Whitesnake came through my neck of the woods the other week, and I’m friends with their new guitarist, Joel Hoekstra, and I got to meet Tommy Aldridge for the first time. Talk about an influence, that guy is a legend. For him to have such a long career and just to be able to perform every night with the energy he does was just ridiculously inspiring. Just to be able to shake his hand was pretty awesome. I think he’s in his mid-sixties, but he looks like he’s in his twenties up there.

MD: Do you have a studio setup at home, and did you use the downtime for shedding?

Mike: Yes, I do. I moved into a new place about three years ago, I built a sound treated room in there and I have an identical kit to my touring kit in there as well as a V-drums setup. If I want to come down and track a quick idea, I’ll turn the V-drums on and just play to get the idea recorded. I currently have the same kit I recorded on set up, and I’ve been just getting back in shape for this return show and tour.

One of the other big differences with this recording process is that on the last few albums we would write and have all the material ready to go, pre-producing everything on our own and pretty much having it ready to record, so going to the studio just meant laying it down. This time around when we wrote it was very raw, and just very basic, and the plan was to let it evolve in the studio while we were there. Because of that, things changed on the fly pretty much daily, so once the record was done it was kind of a fun process to come home and relearn everything so I could play it in its entirety as parts changed sometimes by the minute in the studio.

MD: You’re a huge Chicago Blackhawks fan, and I gather you used to train in MMA. Do you see a connection between being a drummer and an athlete?

Mike: Absolutely. I think drumming in itself is very physical and very much like being an athlete. I did train in MMA for a short amount of time back in the day, but I was always wary about needing my limbs to earn a living. But I go to the gym regularly and have a smaller home gym if I can’t make it out there. When the tour comes up I go see a personal trainer to get in shape, try and eat right, and stay healthy. I see it like a professional athlete in the offseason; they go see their trainers and put on muscle, they’re prepping for the season. I see it the same way and I take it very seriously. I want to give every single fan the best show I can give them and I want to perform at a hundred percent every night.

For more on Mike Wengren and Disturbed, go to disturbed1.com. 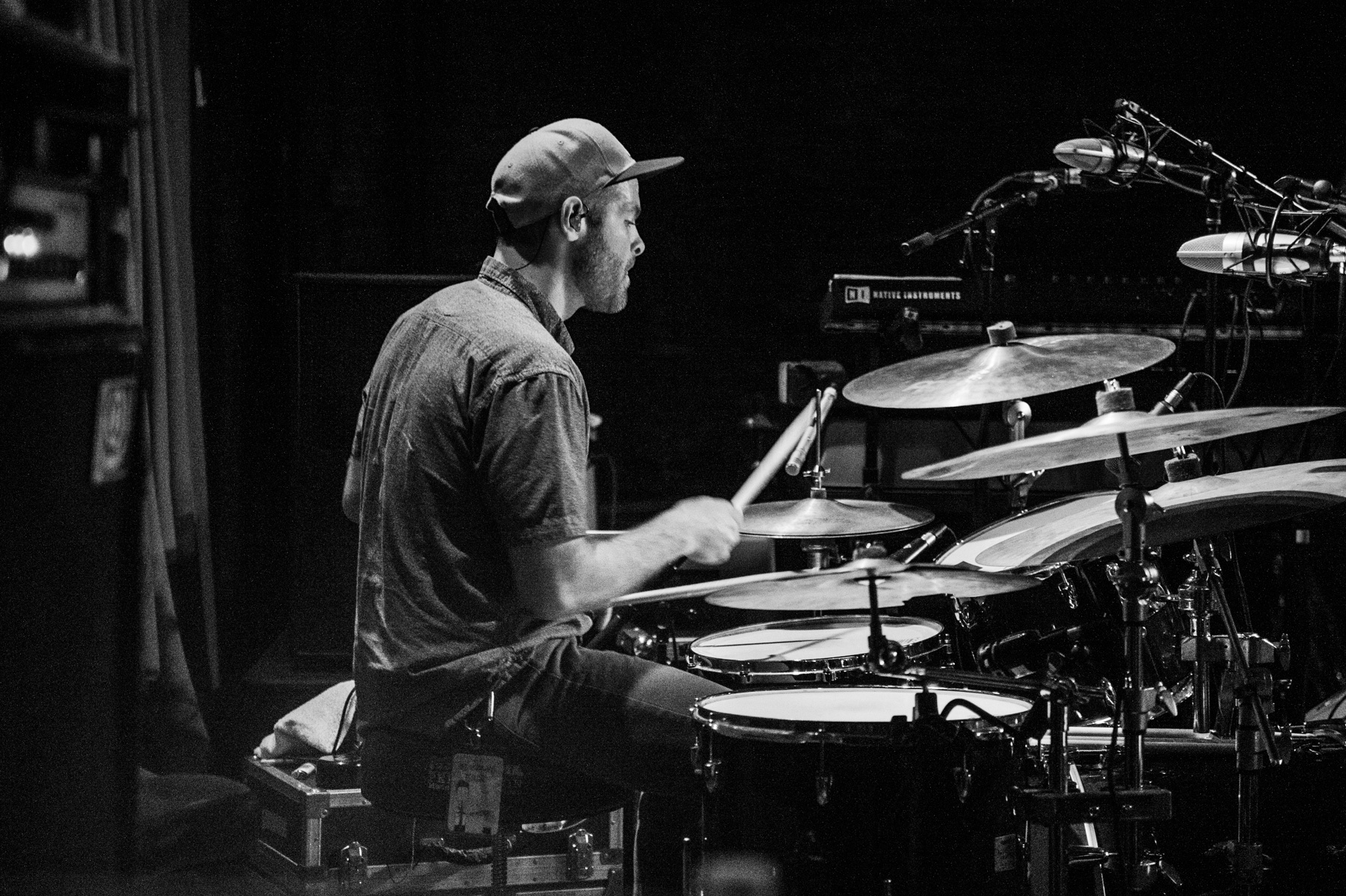 On the Beat With Andrew Campanelli of the Revivalists: Talking Go-Go Rhythms and Men Amongst Mountains