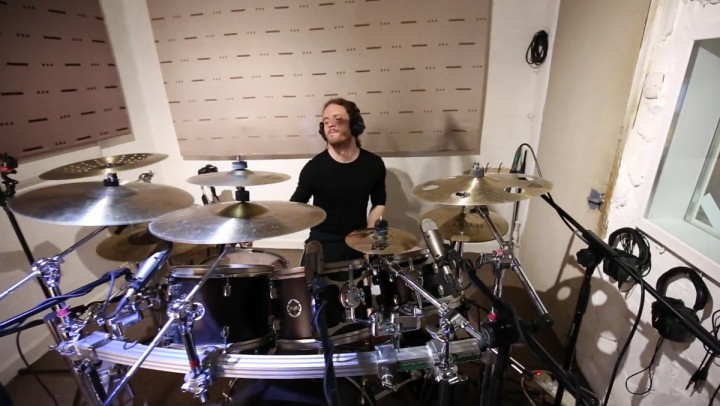 I’d like to do something a little different with my first new TesseracT drum video. I want to share with you the point I’m at right now, before I’ve spent six months on the road with the song.

At this stage I feel like I know it pretty well. I’ve got most of the detail down, and I’m comfortable with the grooves. That said, I know that in six months I’ll have reinvented grooves and realized new fills and nuances, so at that point I’ll shoot the video again in an attempt to highlight the evolution.

“Dystopia” is one of the first four tracks I’ve been working on from our new record, Polaris. It’s also one of my favorites. The other three…I won’t ruin the surprise, as we’re playing them live on the upcoming Australian, North American, and European tours.

As with most TesseracT songs, the drums to “Dystopia” were first programmed using Toontrack Superior Drummer and a mixture of its and our own samples. The challenge for me is to translate the programmed version of the song into an accurate live performance. This involves a few steps, and since I don’t read music and know very little music theory, I’ve devised my own methods.

The first method is digesting the track. I listen to the music a lot, mostly on car and train journeys, as I do a lot of traveling these days. It doesn’t take too long for me to grasp the structure of a song and the basic feel or groove—usually after three or four listens I can attempt to jam a song. However, there’s a lot of detail in this track that, if you’re not a drummer, you’ll probably miss. There’s still some detail that I feel needs more work—fill transitions and ghosting, mainly—but as a starting point before I’ve toured the song, I’m pleased with where I’m at.

The second stage is fine detail. This is where I spend time drilling/repeating a specific groove, either by simply listening to the music or sitting behind my kit. I take time to work out the most comfortable ways to achieve fills, either with techniques I already know, or, usually, realizing I need to train myself to do something new. That’s the biggest and most rewarding challenge. 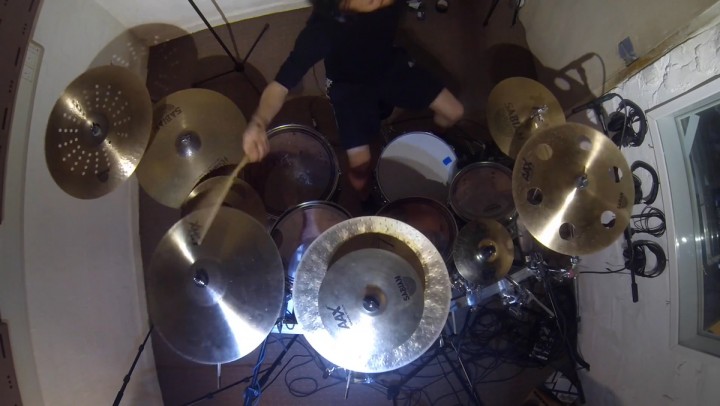 Practice without a kit is an in-between but crucial step for me. This is where I generally realize the ghost-note patterns I’m going to play, along with annoying the people around me by tapping my fingers and hands on tables, the edge of a seat, or my car steering wheel (the best kit in the world!). It’s insane how much this helps, though, as usually I’m not listening to the music. By this stage the song is in my head and I’m recalling it. It’s essential to be at that stage with any song before performing in front of an audience.

Live evolution is the final stage, which I’m sure every musician in my position wishes could be moved to before the recording process. Every song takes on a whole new dimension after it’s been toured. Musicians reach a point of familiarity, comfort, and energy that is rarely captured in a studio—hence why so few albums are “classic,” in my opinion. My ambition for the fourth record is to capture this feeling.

At the end of the European tour in 2016, I’ll go back into the studio to record the evolved version of the song and delve into all of the tiny details. But for now I’d love to hear what you guys and gals have to say about this one.

I’d also love to share the news that after a lifetime obsessing, I’ve started to build drums. The snare drum in this video is number 1. It’s a 6.5×14 teak stave snare, and I’ll be bringing it out on tour. I’ll definitely have more on this in the new year.

For more on Jay Postones and TesseracT, go to tesseractband.co.uk.  And go here to get the August 2015 issue of Modern Drummer, which features an exclusive interview with Postones.