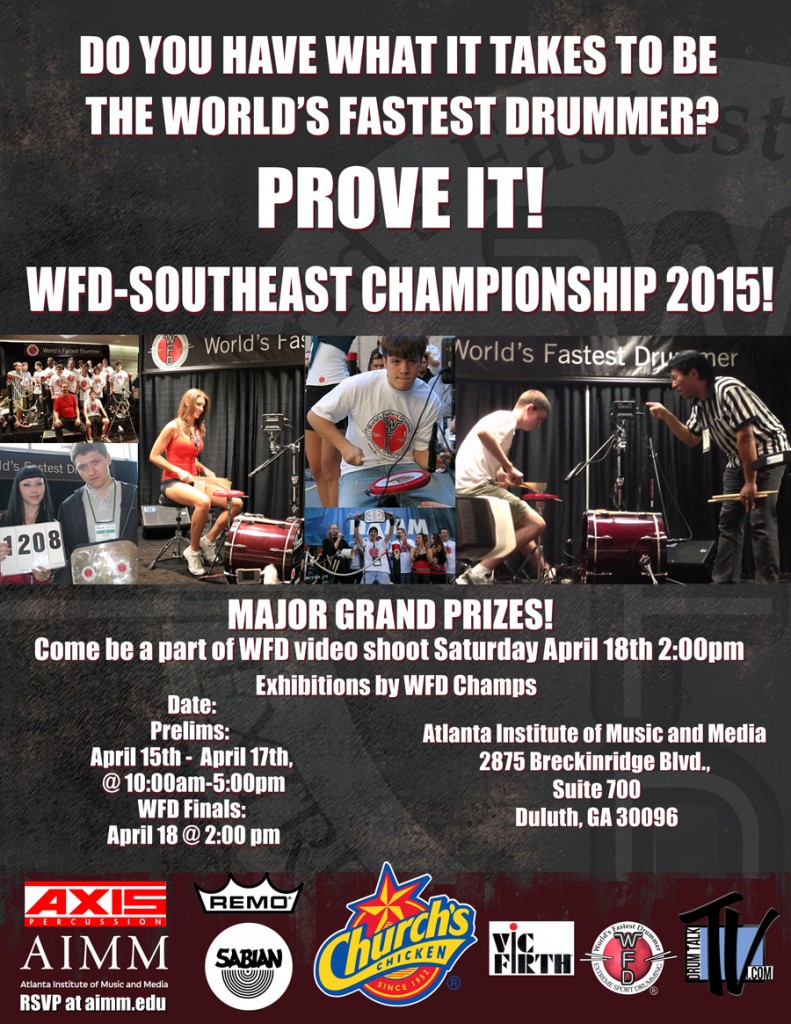 The World’s Fastest Drummer (WFD) will continue its fifteenth-year celebration at the Atlanta Institute of Music and Media (AIMM), 2875 Breckinridge Blvd., Suite 700, Duluth, GA, from April 15 to 18, 2015.

The Fastest Hands and Fastest Feet competition prelims will be held Wednesday, April 15, through Friday, April 17, from 10 am to 5 pm each day. The top-ten fastest hands and top-ten fastest feet will come together on Saturday, April 18, at 2 pm to battle for grand prizes and the opportunity to advance to the WFD World Finals at Summer NAMM 2015.

Church’s Chicken, one of the world’s largest quick-service chicken restaurant chains, has signed on as an exclusive sponsor for the 2015 World’s Fastest Drummer Southeast Championship. “Our customers and our crew should expect the unexpected with this competitive alliance,” says Mark Snyder, Chief Marketing Officer for Church’s Chicken. “We will bring this music experience into our restaurants and hopefully to all the places our customers enjoy our food.”

“Drummers were the first smart-phone,” says Boo McAfee, the creator of WF, Extreme Sport Drumming Competition, and the Drumometer. “Drummers told the weather and led civilizations in and out of battles, celebrations, and rituals for centuries. Yet history has forgotten the profound role drummers played in our social development. It’s time to bring the power of the drumstick back to the forefront. We can think of no restaurant chain with more credibility in knowing drumsticks than Church’s Chicken.”

Church’s Chicken will be sharing exclusive footage from the WFD Southeast Championship with its smartphone app-registered users as well on the company’s Facebook, Twitter, and other social media platforms.