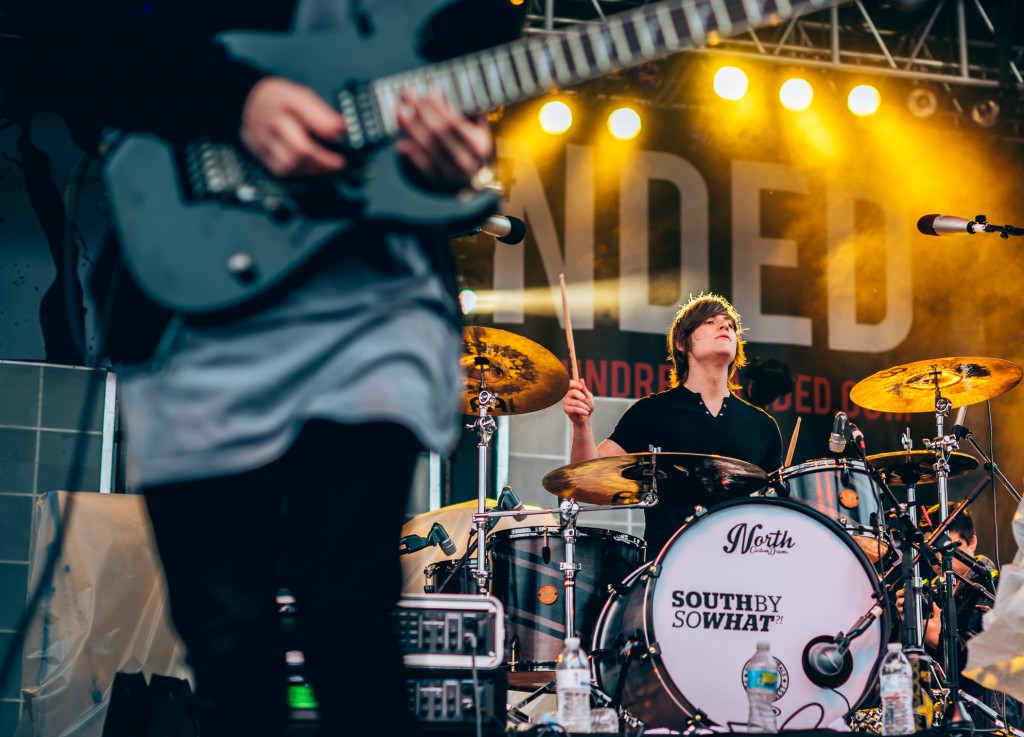 What’s up Modern Drummer! My name is Brandon Burkhalter. I play drums in instrumental progressive rock quartet Polyphia, and when I’m not doing that I’m singing, playing piano, writing music, or lending myself to the next generation of up-and-coming shredders by teaching and trying my best to make the folks under my wing better than me.

That being said, I wanted to share today one of the concepts I feel to be the most beneficial to all players (especially the younger ones, myself included) that I even still focus on to this day—keeping things simple with your playing.

When I first started drumming ten years ago, I had sought after nothing other than going completely nuts on my drums and fitting as many notes into the supple ear canals of those subjected to listen as possible. This mentality and thousands of hours of meticulous practice did, fortunately, bring about this end goal to the extent that I had hoped after all these years. Ironically enough, however, I found my ballistic explosions of Chinese New Year firecracker-esque–style hurting me more than they ended up helping me. If I had a penny for every time a client I’ve worked with in a session or a frustrated band member growing up had told me to “tone it down” with my parts, I actually might have just enough money to compensate for the gigs that I got fired from and the phone calls I no longer receive as a result. Although, in my own defense, I will say I’m fairly certain my chops did have a lot to do with me ascertaining those gigs in the first place, almost as if my linear coordination were some sort of percussive “mating call” that attracts those who need rhythmic backing in their music.

Let’s pick that bizarre metaphor I just made apart for a second though; what people have always expected from me in a musical situation is rhythmic “backing,” not soloing. The nagging of disgruntled musicians and my own ears over time had helped me to begin to realize that the drums are a supportive instrument in almost every musical situation, and that if I wanted to be successful and, quite frankly, enjoy what I was listening to, I needed to accept this role and learn to use what I know how to do more sparingly.

As I’ve matured as a person and a player, this frame of mind has really begun to sink in, and I find the most difficult thing nowadays isn’t at all how fast I could possibly move my rudiments around the drums, or how totally jazz-fusion-fabulous I need to make everything that I do, but how to really add something to the song I’m playing on and to the people playing it with me, instead of subtracting from it by letting my ego get in the way.

All in all, I won’t lie; I think drum chops are badass and I love playing them. I’ve spent a lifetime cultivating an aggressive style of playing, and I love whipping that style out as often as I can—it’s just how I like to express myself. But I also love to focus on technique in my lessons and watch my students go from zero-to-a-hundred real quick and become little monsters in a matter of months because they realize how beneficial technique is as a player. Of course, if music were an ice cream sundae, flashy drum fills and sparkly licks would only be the cherry on top, and no one orders a frozen dessert to get a bowl full of sugary red balls.

Alright, I’m done with my petty analogies and making you suffer through them; here’s a video of myself and my bass player jamming, and me having some fun and going way over the top in complete disregard of everything I’ve said in this blog. (laughs). Check out our debut record Muse, it’s being re-released April 21, to hear what I actually played in the studio for our song “Sweet Tea.” Groove onward!