Due to a database error, The Ludwig Drum / Paiste Cymbals contest has been extended until June 10th, 2015. Everyone who entered previously will need to reenter this contest for a chance to win. 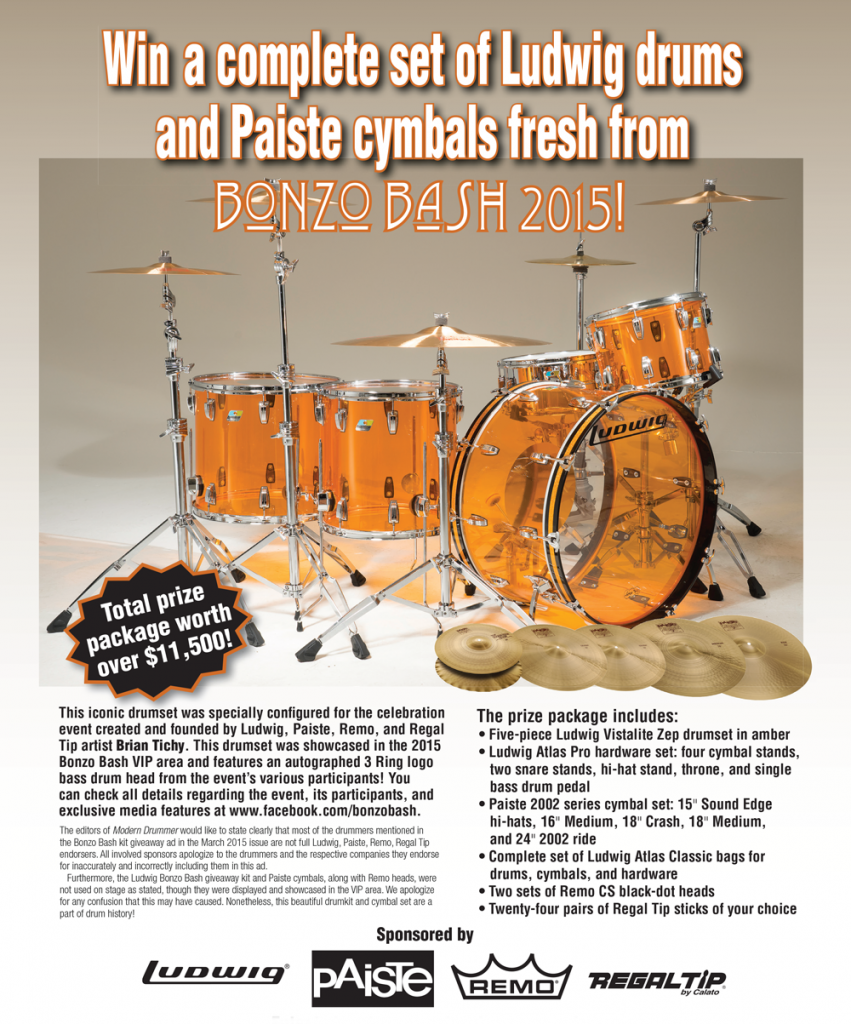 This iconic drumset was specially configured for the celebration event created and founded by Ludwig, Paiste, Remo, and Regal Tip artist Brian Tichy. This drumset was showcased in the 2015 Bonzo Bash VIP area and features an autographed 3 Ring logo bass drum head from the event’s various participants! You can check all details regarding the event, its participants, and exclusive media features at www.facebook.com/bonzobash.

THE VOTING PERIOD FOR THIS CONTEST IS OVER. WINNERS WILL BE CONTACTED VIA EMAIL.

Consumer Disclosure: 1. To enter, visit www.moderndrummer.com between the dates below and look for the Roland Contest button (one entry per email address). 2. ODDS OF WINNING DEPEND ON THE NUMBER OF ELIGIBLE ENTRIES RECEIVED. 3. CONTEST BEGINS FEBRUARY 1, 2015, AND ENDS June 10, 2015. 4. Grand Prize Drawing: Winner will be selected by random drawing on June 11, 2015. Winner will be notified by phone or email on or about June 15, 2015. 5. Employees, and their immediate families, of Modern Drummer, Conn-Selmer, Paiste, and their affiliates are ineligible. 6. Sponsor is not responsible for lost, misdirected, and/or delayed entries. 7. Open to residents of the U.S. and Canada, 18 years of age or older. Void in Quebec, Canada; Florida; New York, and where prohibited by law. 8. One prize awarded per household per contest. 9. Prizes: Grand Prize – One (1) winner will receive the prizes as described above. Approximate retail value of prize: $11,500. Approximate retail value of contest: $11,500. 10. Sponsored by Modern Drummer Publications, Inc., 271 Route 46 W, H-212, Fairfield, NJ 07004, 973-239-4140. 11.By submitting your email address and entering our contest you agree to  receive electronic messages from Modern Drummer and this contests’ sponsors. 12. This game subject to the complete Official Rules. For a copy of the complete Official Rules or the winner’s name, send a self-addressed, stamped envelope to: Modern Drummer Publications/Ludwig-Paiste/Official Rules/Winners List, 271 Route 46 W, H-212, Fairfield, NJ 07004.