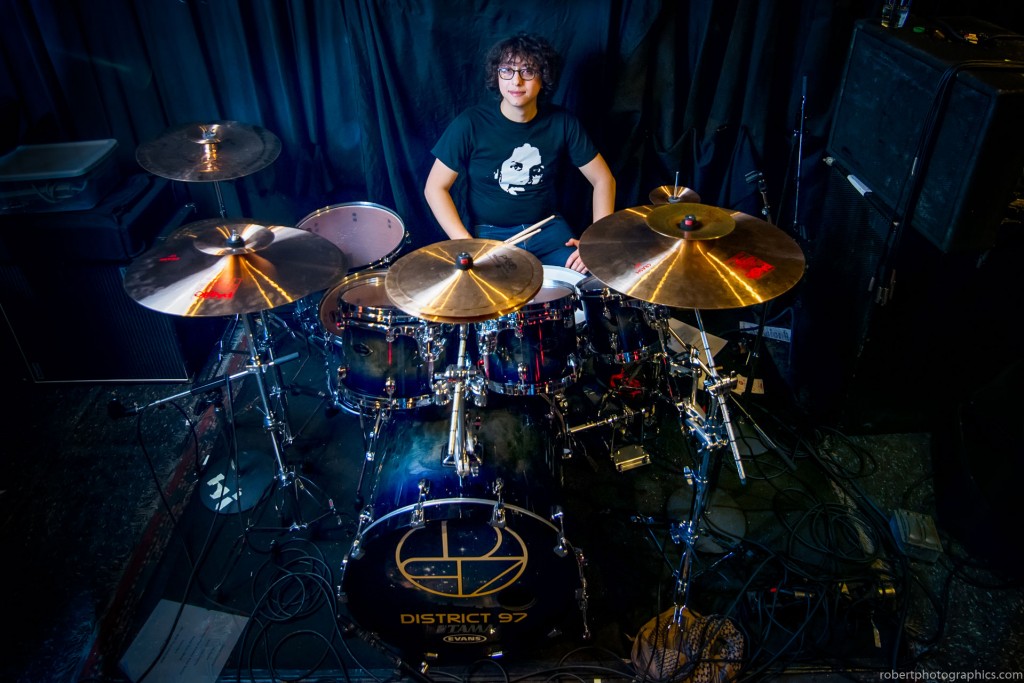 Hello, MD readers! This is Jonathan Schang, the drummer and primary composer of the Chicago-based progressive rock band District 97 featuring 2007 American Idol female finalist, Leslie Hunt. You may remember me from the 2012 Modern Drummer Readers Poll, when I placed in the Best Up and Coming drummer’s category. What an honor and surprise that was. I’ve been up to a lot since then and this is a very exciting time as a lot of those activities are now coming to fruition in some very cool ways.

Around the time of the MD Readers Poll, I struck up an email correspondence with legendary singer and bassist, John Wetton (King Crimson, UK, Asia). District 97 was in the midst of recording our second record at the time, Trouble With Machines, which included a mini-rock opera I wrote based on the 19th-century serial killer H.H. Holmes titled The Perfect Young Man. In a rather gutsy move, I asked John if he would be interested in singing the part of the villain. To my surprise, he obliged immediately with a wonderful and incendiary performance. This experience eventually grew into two full-fledged joint tours of Europe and the USA in 2013. The set was comprised of both District 97 music and treasures from John’s iconic tenure with King Crimson from 1972 to 1974. This put me in the simultaneously thrilling and terrifying position of playing the parts of one of my all-time favorite drummers, Bill Bruford (video here).

I weighed my options on how to approach the material; would I completely do my own thing, or would I try to stick closely to what Bill laid down on the original recordings? In the end, I think I struck a happy medium that saw me putting in my own creative energy, but also adhering fairly closely to what Bill did on some of the most revered moments of the catalog (the drum fills on “One More Red Nightmare,” for example). I’m overjoyed that this will all be documented on the upcoming release District 97 With John Wetton-One More Red Night (Live in Chicago), due October 6 on Cherry Red Records. A sampler can be heard here.

Coming off of this experience gave me inspiration for my current undertaking, recording District 97’s third studio album, a pursuit in which I’m greatly aided by my endorsers Tama, Paiste, Evans, and Promark. We’ve been in the studio for a couple weeks, and I can’t wait for the world to hear what we’ve been up to.

A live version of our brand new song “Takeover” can be seen below, and our successfully funded Kickstarter campaign to fund the album (with more music samples) is here.

Many thanks to Modern Drummer for inviting me to do this blog.