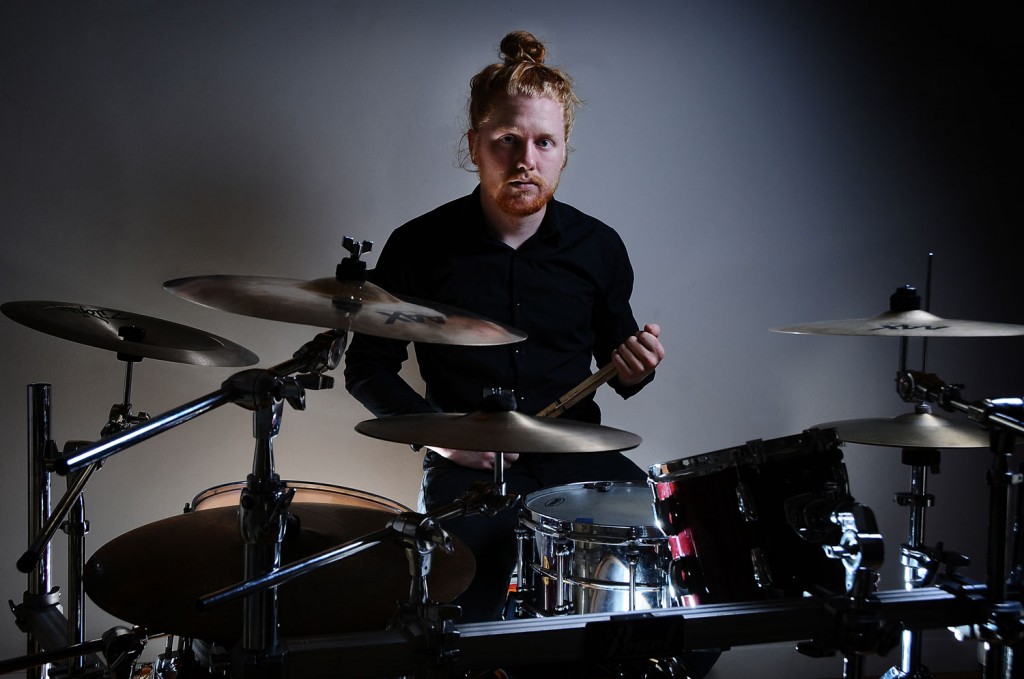 Hi there, my name is Charlie, and I’m the drummer for Exist Immortal—not for very long, mind, but it seems like it’s been a far longer time than two months.

Having not been a part of the writing process with the band, which was already fully formed and gigging when I joined up—notably at Tech Fest—it’s been a pretty intense rush to get everything ready for the live performance. It’s been a huge step up for me professionally, and I only hope it keeps going in that direction for a long time to come.

I’ve been playing drums since I was thirteen, aggravating all my neighbors (although one of them had an Il Niño T-shirt that I loved, so I didn’t think he minded too much) and practicing along to the likes of Slipknot, Dream Theater, and Trivium. As I got older I moved from the out-and-out metal style of drumming to a much more groove-based setting, letting the ghost notes fill out the rhythms rather than over-enthusiastic fills. It’s a style I think fits the band a lot better.

I first got in contact with Exist Immortal when I was in my old band, Surface the Dissent. Having gigged with Exist Immortal on a few smaller shows, I got to know the members of the band well. I also worked with their vocalist, Meyrick de la Fuente, when he produced too an EP by my other band at his studios. He told me that he was interested in getting me on drums for Exist Immortal, which is something I happily agreed to.

However, it had been a long time since I had played drums, let alone in a band requiring the level of professionalism that they expected. I was introduced to whole new ways of drumming live, which seems to have worked out for the best, and I can’t imagine being without that knowledge now.

For a start, my setup is much more stripped-back now. I play a Pearl VMX kit with a 18×22 bass drum, a 14×16 floor tom, and an 8×10 rack tom. I prefer the high-pitched sound, as it cuts through with the low tuning of the guitar in our songs. I also use a Pearl rack, which makes it so easy to maneuver my kit, and some very old pedals that seem to be hanging on; like your first car that you lost your virginity in, you know they’re rubbish but you can’t quite seem to let go. My cymbals are very much of discussion point. I’m still trying out a lot of different makes; right now I’m using a Zildjian K China, Sabian AAX crashes, Pearl hi-hats, a stack made up of two cymbals I found when I was at school, and a 20″ ride. Again, all these are higher pitched to get them to cut though the low guitars and make the individual sounds more impactful in the live sound.

The band has not only impacted my setup, far more directly it’s influenced the electronic side of my playing. I’m now playing to a backing track, which is something I’ve never done before, and I’m using triggers on my bass drum, which, again, I’m new to, and again it’s something that I can’t see doing without. As much as a drummer keeps the time and rhythm of the band, playing to the backing track allows this to be so much tighter live, and along with triggering the acoustic drum (to give a punchy yet natural sound), it allows the live performance to sound as close to the recorded sound as possible, while retaining energy and rawness.

At the moment I’m just loving being behind the drumkit again, playing music that I enjoy, pushing myself, and playing in as many different cities as I possibly can. I’m very lucky to have this opportunity, especially with four other people who seem to tolerate me as much as they do!

Thank you for reading.

For more on Charley Bines and Exist Immortal, go to facebook.com/existimmortal.