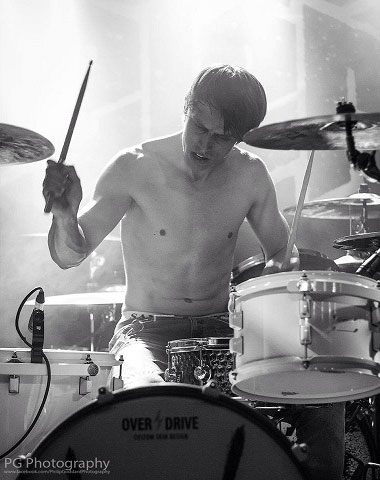 I’m Edd, and I play drums for Empress AD.

We started the band a long time ago, but we’ve only been playing shows for about a year and a half now, and that time has flown by. I played drums in a few bands before, mainly focused around the heavier side of the music spectrum, but playing in Empress AD has allowed me to explore a wider range of genres and hack into styles which I was not as accustomed to before on drums.

I’d love to tell you when I started playing drums, but it’s all a bit of a blur really. My parents met through music, so it was a noisy household from day one, I’d say. My two sisters and I would always be found playing piano, singing around the house, or generally doing everything in our power to make as much noise as possible. It was only a matter of time until the tapping started.

From a very young age I was tapping on tables, my chest, other people, or any other nearby surface that created a form of noise. I remember getting home from school one day, and there it was—my first ever drumkit. I began playing that straight away, and the bug was there to stay.

It took me a while to discover alternative music. I typically listened to funk, jazz, and classical music when I was young, as I also play piano, and those genres were the ones which I used to learn. When I got into my mid-teens, I went to some gigs and festivals with some friends and it was a real turning point.

From there my taste in music expanded into a completely different direction—and continues to do so. I went through the whole stage of listening to really heavy, technical bands just for the sheer satisfaction of listening to the drums, but in recent years my playlists have become more varied and slightly erratic. One second I’ll be listening to the crushing riffs and drums of Mastodon, and the next I’ll be cheerfully humming along to the well-known film scores of John Williams.

Over the past year and a half I’ve been incredibly busy on the road with Empress AD. We’ve been on several large U.K. tours, played a number of U.K. festivals, and recorded our debut album, Still Life Moving Fast [out September 2]. There have been far too many good moments to list, but my favorite few have to be playing Download Festival last year and recording our album for a month in the studio.

We’ve got a lot to look forward to for the rest of 2014. We just signed to Roadrunner Records worldwide, which we’re all very excited about. I’m sure there are many tours, festivals, and other good times to look forward to, and to be part of such a prestigious label is a real honor.

In terms of the gear I use, I’m a proud endorser of Zildjian cymbals, which is currently my only endorsement. Touring has meant that I’ve played on a wide range of different kits, but the kit I’ve used for several years is a Tama Starclassic. I also use Iron Cobra pedals and Vic Firth 5B sticks.

Thanks for reading, and I hope to see you at a show some time.

For more on Edd Unwin and Empress AD, go to empressad.com.