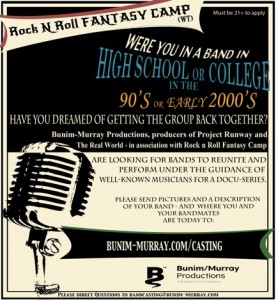 Bunim-Murray Productions, producers of Project Runway and The Real World – in association with Rock ‘N’ Roll Fantasy Camp – is producing a docu-series for a major cable network. We are looking for bands to reunite and perform under the guidance of well-known musicians.  Please send pictures of yourself and the band – along with a brief description of your band and where you and your bandmates are today – to bandcasting@bunim-murray.com.  Must be 21+ to apply.