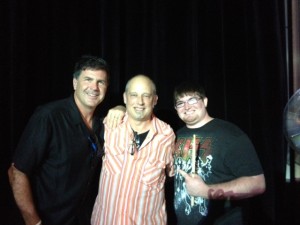 Eric has been drumming since he was three and performs with the local cover band Powerhouse. Austin entered the contest through an ad in the Musician’s Friend catalog. He usually shops locally in Springfield, IL, at Daddy O’s Music Shack, and online.

“The PMC hoped that the ‘Drum Roadie for a Day’ IDM contest could offer something extraordinary for our retailers and their customers, and we did it,” says Brad Smith, executive board member for the PMC and representative at meeting. “Ben Smith was a fantastic host and totally bought into the idea of inspiring a young drummer. Ben explained how to network with other musicians, take advantage of personal skills that make you unique, and play for the song—all good tips for a successful career.”

Eric drove two hours to get to the show because he knew this was a chance to a lifetime. “Meeting a bona fide pro drummer is such a unique opportunity for an aspiring drummer. I thank the PMC and Ben for creating this opportunity. I’ll never forget standing backstage and watching the seats fill up, waiting for the show. It’s a view I’ve never had before,” says Austin, who added that the coolest part was when Ben gave him his e-mail address and told him to send him his recordings. The networking started that day!