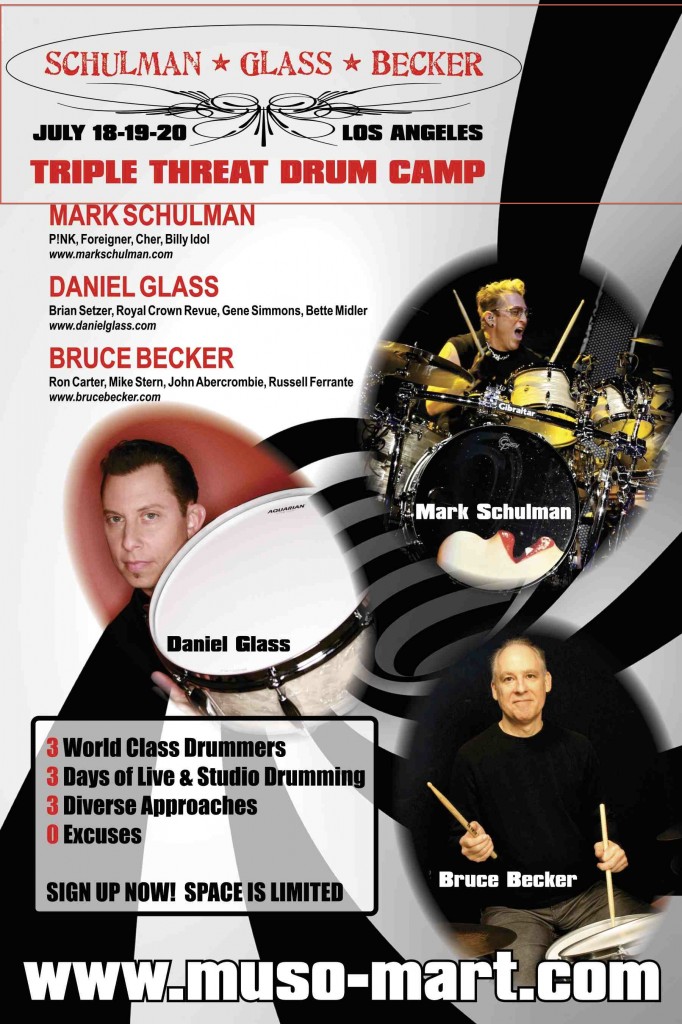 Students at the Triple Threat Drum Camp (TTDC) will have a chance to go home with more than just improved drumming skills and memories of an once-in-a-lifetime opportunity to study alongside three of the world’s top drummers! The TTDC will be giving away a 6 x 13” Mark Schulman Signature Snare from Gretsch (MSRP $535.99); a 15” AAX-Xplosion Crash Cymbal from Sabian (MSRP $185.00),a DW 5000 Series Pedal (MSRP $333.99); a 20” Vanguard Ride Cymbal from Crescent Cymbals (MSRP $655.00) and the DrumChannel.com, “Ultimate Drum Trivia” board game from Rock Science and pairs of Vic Firth Signature Sticks among other exciting giveaways.

At the TTDC, a limited number of students will enjoy the opportunity to play with, and learn from three of the world’s most experienced, educated and passionate drummers in an ultra-intensive, intimate classroom setting — as well as experience a full day in a professional recording studio. For two, eight-hour days, student play along with the instructors on individual practice drum kits allowing for an incredibly intense, hands-on educational experience that guarantees results. Students will also have the opportunity to receive a day of playing time analysis in the world-famous Drumchannel.com recording studio!

All students of the legendary Freddie Gruber, Schulman/Glass/Becker offer up a unique program that will cover such various topics as:

–     Evolution: History of the Rhythm Section

For over 26 years, Mark is the “first call” drummer for world-class rock and pop artists. Having finished his third record-breaking world tour with P!NK, Mark recently joined Cher for her “Dressed To Kill World Tour 2014.”  Mark’s resume reads like a “Who’s Who” of international rock/pop royalty including: Billy Idol, Foreigner, Sheryl Crow, Stevie Nicks, Velvet Revolver, Simple Minds and Beyonce among others. Mark was voted ‘Top 3 Pop-Rock Drummers’ in the 2014 Modern Drummer Reader’s Poll and his new book, Nerve Breakers: Conquering Life’s Stage Fright is a must-have book for anyone who wants to transform performance anxiety into the confident peak performance.

Daniel Glass is one of the foremost authorities on classic, American drumming. He has recorded and performed with a host of topflight artists, including: Brian Setzer, Royal Crown Revue, Gene Simmons, Bette Midler, Liza Minnelli and Mike Ness from Social Distortion among others. Daniel is also an award-winning author, clinician and educator. He has written five books, including Roots of Rock Drumming (with Steve Smith). His DVDs, The Century Project and TRAPS recently topped the Readers Poll awards in both Modern Drummer and DRUM magazine. Daniel has performed more than 250 clinics across the world, including stints at prestigious festivals like PASIC and the Modern Drummer Festival. www.danielglass.com

As an educator, Bruce has drawn from his more than thirty year association with drumming guru Freddie Gruber carrying on the torch of a unique approach to developing students’ understanding of the natural principles of the physical body’s interaction with the drum set. He debuted his educational DVD Concepts and Philosophies in 2013 and his new book, Odd Time Studies is scheduled for release this year. Bruce has taught drummers such as, Mark Schulman, Daniel Glass, David Garibaldi, and Tony Arco. Bruce has performed master classes and workshops in music conservatories and schools in the USA, Germany, Italy, Belgium, Austria, the Netherlands, Latvia, Moscow, Argentina, Uruguay and Australia. www.brucebecker.com