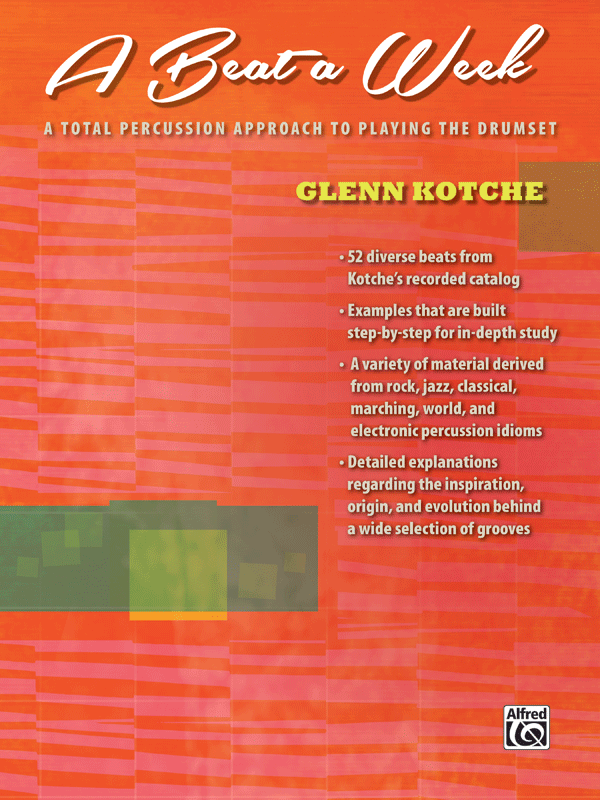 In this book, Wilco’s drummer provides fifty-two examples of varied drum patterns from across his recorded catalog. In his development as a player, Glenn Kotche was exposed to rock, jazz, classical, electronica, and many other styles. As he suggests in the book’s intro, his personal amalgamation of the varied techniques and attitudes of these disparate genres is what makes his playing approach what it is—and he hopes that by working through the patterns here you’ll be nudged closer to finding your own unique voice at the kit. Glenn suggests that you can do as the title suggests and work through the patterns in order—he smartly groups the lessons by characteristics (“Beats With Unconventional Hi-Hat Use,” “Tom-Centric Beats,” and so on)—but says it’s also perfectly fine to skip around and work at your own pace.

Beats that Kotche has played with Jim O’Rourke, Loose Fur, the Kronos Quartet, and his duo with Darin Gray, On Fillmore, are included, and of course a good deal of the patterns were created for his main gig, Wilco. Fans of Kotche’s drumming in that band will be intrigued and inspired by the evolution of several of the tracks, including the drummer’s creative decision to alternate between two distinct approaches on “I Am Trying to Break Your Heart” from Yankee Hotel Foxtrot and his cool floor tom work and implied meter on “The Late Greats” from A Ghost Is Born. Unlike many contemporary method books, a CD containing play-along music is not included here. But most of the tracks are widely available—and if you’re a Kotche fan, you probably already own most of this stuff. Throughout the book Kotche provides copious tips, breaking patterns down into smaller chunks and building them up in a progressive fashion. (Alfred, $19.99)