Renowned drummer and Pearl artist Virgil Donati recently announced the “In This Life” US tour. The twelve-date event kicks off on July 12 at the legendary Baked Potato in Los Angeles, CA, and will make its way around the US for the following two weeks before coming to a close on July 25 at Douglas Corner in Nashville, TN. A full list of tour stops can be found here.

For Virgil Donati, this tour comes in support of his debut solo album, In This Life, which was released in July of 2013. In This Life stands as the first album in which Virgil wrote, composed, and orchestrated the entire thing himself, with his astounding technicality and mathematical approach to the drumkit being ever present throughout each highly complex track. Along with performing tracks from In This Life, Donati will be also be performing a few tracks each night from artists whom he has previously collaborated with in the past, including Planet X and Allan Holdsworth.

Virgil Donati will be playing a Pearl Reference series kit for this tour, topped off with his signature series snare drum. Virgil’s full specs can be found here.

For more information on Virgil Donati and for ticketing information for the “In This Life” US Tour, visit Virgil’s official website at www.VirgilDonati.com. 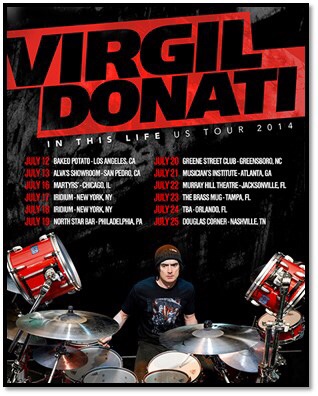