Filmmaker/drummer Travis Satten recently released this video expounding on Jojo Mayer and his drumming philosophy. Modern Drummer caught up with Satten to ask a few questions about the film.

Travis: I have always appreciated Jojo and his contributions to the drums and drumming. He did a TED talk that really struck a chord with me and made me wonder how I  could turn it into a film. I approached Jojo with my concept and some clips of previous work I’ve done (commercial/music video, etc.) and he was interested in collaborating.

The largest challenge was providing compelling imagery for a film with such heady, conceptual themes. Knowing the footage of Jojo’s performance would have raw physicality, we thought the other images should be more abstract and out-of-body feeling.

MD: How did being a drummer yourself inform your choices with the film

Travis: It never ceases to amaze me how drumming and film-making have so many similarities. My favorite drummers – Purdie, Gadd, Buddy, Bonham, Tony, Philly Joe – along with so many of the greats are a combination of chops, feel, restraint, flash and countless other factors. Film-making, and more particularly the editing process, is where these themes really come together. If you want to connect with the viewer/listener and go more than skin deep it’s a balance of creating a solid foundation and knowing when to hold back, and when to flex to take the image/tune/whatever to the next level. On a simpler level, film production is very physically demanding and involves a lot of gear and it’s transport – any drummer knows exactly what I’m talking about.
MD: What was it like working with Jojo?

Travis: Jojo is a true artist in every sense of the word and a very inspiring dude. We all know he’s got chops for days and any hot-lick you’re proud of he was playing in the ’90s twice as cool. However, how he takes all of his chop/technique/knowledge of the drumset and it’s history and applies them to larger ideas that speak to our culture and art/musics role in it is where he truly separates himself. He makes the drumset a platform for larger ideas and that to me is what musicianship and artistry is all about. Jojo’s a deep cat, the question only becomes how deep do you want to go.
MD: What are your plans for the film moving forward?

Travis: For such abstract concepts the film is doing really well online and so we’re trying to seed it to as many destinations as possible We also have lots of plans for music and tech festivals over the summer.
For more on “Between Zero & One” visit betweenzeroandonefilm.tumblr.com, or for more with Travis Satten visit: www.travissatten.com. 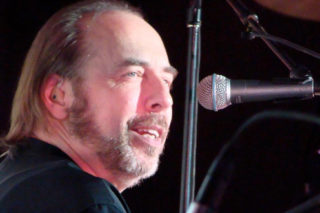 On The Beat with Chris Camilleri of Liverpool and the Happy Together Tour: Talks Legends and Opportunities