For more than a decade he’s rocked the world’s greatest concert venues with the superstars Rascal Flatts, in the process setting a standard for drumming in modern country music. But he’s just as in uential when he’s home, guiding the careers of talented up-andcomers via his popular tutorials, well-attended clinics, and creative in-person lessons. -by Ilya Stemkovsky 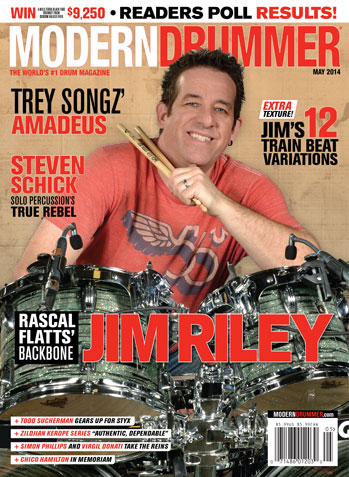 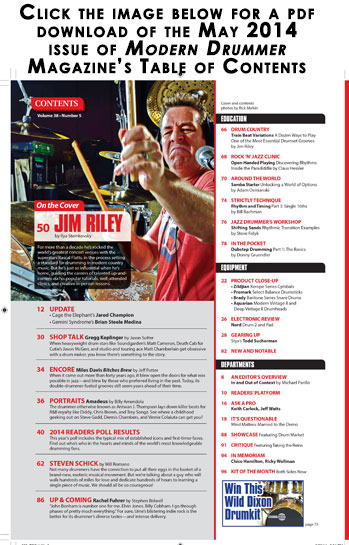 SHOP TALK – Gregg Keplinger
• When heavyweight drum stars like Soundgarden’s Matt Cameron, Death Cab for Cutie’s Jason McGerr, and studio and touring ace Matt Chamberlain get obsessive with a drum maker, you know there’s something to the story. – by Jason Sutter

ENCORE – Miles Davis Bitches Brew
• When it came out more than forty years ago, it blew open the doors for what was possible in jazz—and blew by those who preferred living in the past. Today, its double-drummer-fueled grooves still seem years ahead of their time. – by Jeff Potter

PORTRAITS – Amadeus
• The drummer otherwise known as Antwan J. Thompson lays down killer beats for R&B royalty like Diddy, Chris Brown, and Trey Songz. See where a childhood geeking out on Steve Gadd, Dennis Chambers, and Vinnie Colaiuta can get you? – by Billy Amendola

2014 READERS POLL RESULTS
• This year’s poll includes the typical mix of established icons and rst-timer faves. Find out who’s who in the hearts and minds of the world’s most knowledgeable drumming fans.

STEVEN SCHICK
• Not many drummers have the conviction to put all their eggs in the basket of a brand-new, esoteric musical movement. But we’re talking about a guy who will walk hundreds of miles for love and dedicate hundreds of hours to learning a single piece of music. We should all be so courageous! – by Will Romano

UP & COMING – Rachel Fuhrer
• “John Bonham is number one for me. Elvin Jones. Billy Cobham. I go through phases of pretty much everything.” For sure, Ume’s blistering indie rock is the better for its drummer’s diverse tastes—and intense delivery. – by Stephen Bidwell

IN THE POCKET Dubstep Drumming
• Part 1: The Basics – by Donny Gruendler

Kit of the Month – Both Sides Now