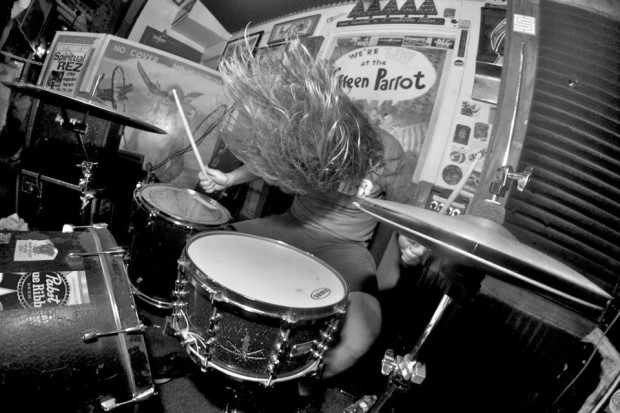 One of the things I learned from my brother, at the ripe age of six, was to “Make sure you beat those things like you mean it!” And it’s true. For me, I enjoy drummers (and any musicians for that matter) that really dig in—when you can see that look of total excitement to be playing music. Spiritual Rez is full of musicians that embody that energy. It’s what’s kept me in the band for ten years.

From furious keytar solos, to horn raging, to all out death-metal/free-jazz bass features, you’ll see we’re no ordinary reggae group. Heck, we’re no ordinary anything! This is what has kept me in this band since we formed it in the basements and dorms of Berklee College of Music back in 2003. I don’t feel constricted. My arms can flail as hard as they want, and it only makes the show better.

Stagnant music is what really grinds my gears—at least playing it. Too often you see players who haven’t embodied any of what they’re playing; they’re just going through the motions.

Sure, I’ve got my list of influences: John Bonham, Abe Cunningham, Gene Krupa, Alex Van Halen…. But any drummer that can come in and rock my face, even from the back of the room, and that’s what really gets my juices flowing. Watching Buddy Rich do a double-bass-drum-only solo took his influence to the next level. Adding ridiculousness to his amazing drumming technique changed me forever. I like to flail and get my heart rate up and spin my sticks. Get that guy in the back of the room to pay attention and rage!

On the road, we have an intense touring schedule. Often we’ll do fourteen shows or more in a row, non-stop, with countless hours of driving in between. The DIY element seems daunting at some points, as I also take care of much of the tour management. And when I say DIY, I mean it. Spiritual Rez writes, records, and produces (at least thus far) our own records, videos, and promotion. You name it, and we’re doing it.

Our newest album, Apocalypse Whenever, was released February 15, and we’ve seen positive response from it. It’s a through-composed piece that embodies the hilarity and insanity of the Spiritual Rez show. It’s also been some of the hardest work we have ever put into our career.

Drumming has been my ultimate release of stress and tension. Any of those things that compound the daily grind are all whisked away in one hard smack. It’s what keeps me able to bear the grind and pleasure of this amazing job.

So keep rocking, even if you’re playing light jazz. Don’t be afraid to get all up into it!
See more of Meat and Spiritual Rez at www.spiritualrez.com, and the videos below:

See more of Meat and Spiritual Rez at www.spiritualrez.com, and the videos below: