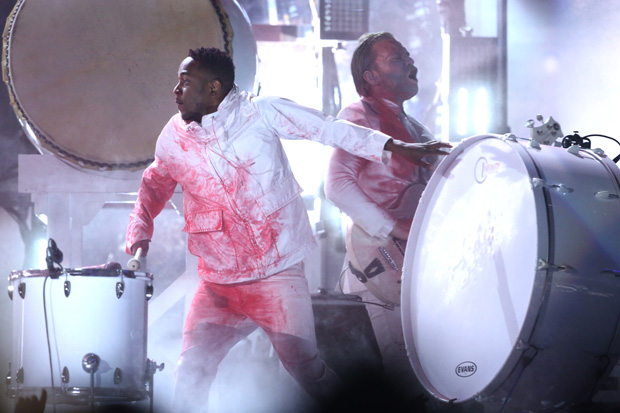 At its recent Grammy-awards show performance with Kendrick Lamar, Vegas-based alternative rock band Imagine Dragons featured a 36″ concert bass drum. Following the show, Infinity Drumworks donated the drum to Hard Rock to become a permanent part of the brand’s world-famous memorabilia collection. The drum will be available for fans to visit only at Hard Rock Live Las Vegas, the venue where Imagine Dragons kicked off their Night Visions tour in September 2012.

In exchange for the drum, Hard Rock International made a donation to MusiCares on the band’s behalf. Imagine Dragons joins an impressive list of artists that have donated music memorabilia throughout the years. The 77,000-plus-piece Hard Rock collection, which celebrates new and legendary music icons, is one of the world’s greatest collections of music memorabilia.

“Our world-famous memorabilia collection is always growing with new and emerging artist donations, and we couldn’t be more excited to add this new piece of award show history from Imagine Dragons,” said John Galloway, chief marketing officer for Hard Rock International. “We’re constantly looking to further our mission to ‘Love All, Serve All’ and hope that our MusicCares donation can provide critical assistance to musicians in need.”

Hard Rock and Imagine Dragons also teamed up for the Hard Rock Cafe Baltimore grand reopening in October 2013. The band helped Hard Rock celebrate the milestone with a red-carpet ceremony and a special live performance, which included hit songs from their debut album, Night Visions.

Imagine Dragons is following an extremely successful 2013 with an arena headlining tour early this year before returning to the studio to start work on its sophomore album. Marked the Into the Night tour, the North American tour will kick off on February 8 in Boise, ID. The band’s album Night Visions, which includes the hits “It’s Time” and “Radioactive,” has sold more than 1.4 million units.

Committed to supporting music and musicians around the globe, Hard Rock International hosted more than 25,000 live music events worldwide in 2013.

For more information on Hard Rock and the Imagine Dragons donation, as well as the entire memorabilia collection, please visit www.hardrock.com.