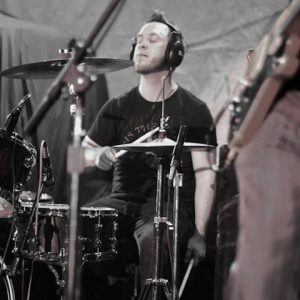 I’ve been interested in drums for about twenty years now. Out of those twenty, ten were spent just hitting drums, and the other ten were spent taking drums seriously. Now I have a degree in music education and I play in the band Mile Marker Zero. If I had only known in the beginning that I would have a career in drumming, I would’ve spent less time hitting and more time practicing.

Here are the top three things I wish I could go back in time and tell myself when I was starting out, and how they would’ve changed my drumming life today:

The importance of counting out loud. I learned this from my percussion instructor, Dave Smith, during my studies at Western Connecticut State University in Danbury. His concept was to count the smallest subdivision throughout a certain piece of music or etude; that way the rhythmic integrity was constant. If I had pursued this method when I first started to understand the concept of 16th notes and so on, my sight reading would have been game changing during college. I’ve recently started using this tool on my students (as young as five years old) and it has worked phenomenally. They’re able to sight-read years beyond their age. It’s also helped their dictation skills.

The difference between playing and practicing. I think every musician falls victim to this problem, or has at least experienced it at some point during their studies. A lot of the time, I used to spend my “practice sessions” thinking I was John Bonham, playing these extravagant drum solos. Or even worse, playing through pieces of music that I already could play really well. When I got to college, however, I noticed that it was way more productive to skip all of that and only focus on things that I had trouble on—no matter how hard it was or how angry I got while doing it. I came to the conclusion that you’re supposed to sound bad while practicing something. Keeping that in mind, my practice sessions today are more productive and fun.

Playing with proper technique. This is probably the most important thing that I wish I knew when I was younger. When I first started out drumming, I actually learned how to hold the sticks correctly. I sat for hours being a good student, playing single strokes on my Reel Feel practice pad—which felt like it weighed 800 pounds in my backpack—and my rudiments. But as time went on and I got older and bigger, I realized my arms started to hurt after playing awhile, and my wrists would get a shooting pain in them that went up my arm—not a good thing to happen when you’re playing a gig. I eventually had to stop playing and went to a hand specialist. He said that I had about 5% strength left in my hands. I had developed tendinitis, carpal tunnel syndrome, and tennis elbow—in both arms! After my surgeries I realized that where I went wrong was in how I hit the drums. Instead of playing off the drumhead, I was focusing my energy into the drum itself, not letting the stick rebound properly, and I was sending tension through my arm. So my biggest words of advice are this: play off the drum, not into it. Let the stick do most of the work while your forearms and wrists guide it. And when you feel some sort of pain, don’t force anything, you’ll end up regretting it.

Thanks for reading, fellow drummers.

For more on Doug Alley and Mile Marker Zero, go to milemarkerzero.com or facebook.com.