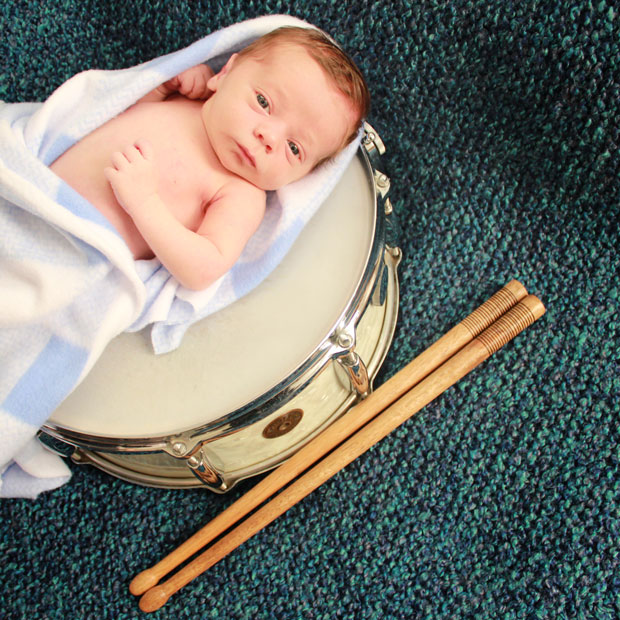 During the forty-two weeks leading up to my beautiful baby boy’s birth at home on August 26, 2013, I toured, recorded, rehearsed, and taught drums on a daily basis. By the time my son was born, he already had eighty-three gigs under his belt.

Gigs ranged from playing my hometown of Oakland, CA to traveling as far as Montana, Wyoming, Colorado, Texas, and everything in between. I played weddings, clubs, parties, regular gigs in a house band at weekly jam nights, parades (with a fife and drum band), and more. After an exceptionally ruckus life in the womb, it’s no wonder that in the first few weeks of his life, the soothing sounds of “1 e & a, 2 e & a, 3 e & a, 4 e & a” seemed to be the only lullaby that would send baby Levon off to snoozeville. 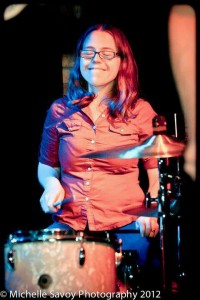 Since so few of us get the unique experience of being a pregnant drummer, I’ll give you a few highlights and life lessons that I learned. First, let’s discuss the pros and cons for your band mates.

The pros include extra drink tickets, a permanent designated driver, and an excuse to ask for more tips. The two biggest cons are that they may have to help carry drums for once, and the chances of them scoring the only available bed or couch while on tour are very low.

In an all-but-typical pregnancy, some of my unborn baby’s first destinations included the NAMM Show in Anaheim and Mardi Gras in New Orleans. In March (at about four months pregnant), I played a few showcases in Austin, during South by Southwest, with a band that needed a last-minute substitute drummer. I probably should’ve mentioned the pregnancy to the band before they overheard me telling a friend at a bar one night. I never heard from them after we returned home.

In terms of touring, the weeklong Austin trip was pale in comparison to the May tour with Muncie (www.munciecalifornia.com) at six months pregnant. Our trusty van and trailer took us on a run of thirteen consecutive gigs across ten states. Needless to say, it was never difficult for us to find a place to crash after a gig, although sometimes we elected to drive all night, like when we played in Idaho Falls and wanted to make it to Las Vegas in time for a brunch buffet the next day.

Shortly after learning I was pregnant, I was offered a gig at a summer concert series in August. Why did that date sound familiar? Oh, right, that was the estimated due date I just got from Planned Parenthood. I mentioned the pregnancy to the event booker (months before anyone besides my husband would get the news), but he couldn’t offer another date. I did what any hustling musician would do, and took the gig anyway.

So there it stood, looming on my calendar for almost a year—a gig on my actual due date. Then another few gigs popped up a couple weeks before, then another the day before, and then one a week later. I ended up making them all, with the exception of one that was two days before my son was born. To my defense, I tried to go, but my band mates and my husband wouldn’t let me, most likely since I was seven days overdue at the time. I didn’t get that. I mean, what’s the worst that could happen?

Since over a dozen of the gigs during my pregnancy were weddings with my soul/R&B cover band, West Grand Boulevard (http://www.westgrandblvd.com), it was only fitting that Levon’s first gig on the outside was yet another wedding, only five days after his birthday. At nearly three months old now, Levon continues to attend gigs against his will, a trend that will surely continue for years to come. All I can hope for is that someday I will be forced to unwillingly attend some of his.

To see a video of the infamous due date gig on August 17, click here.