In his first MD cover story since leaving Dream Theater, the prog-metal icon talks about the infamous split—but makes clear how much he’s digging the bounty of new opportunities coming his way. 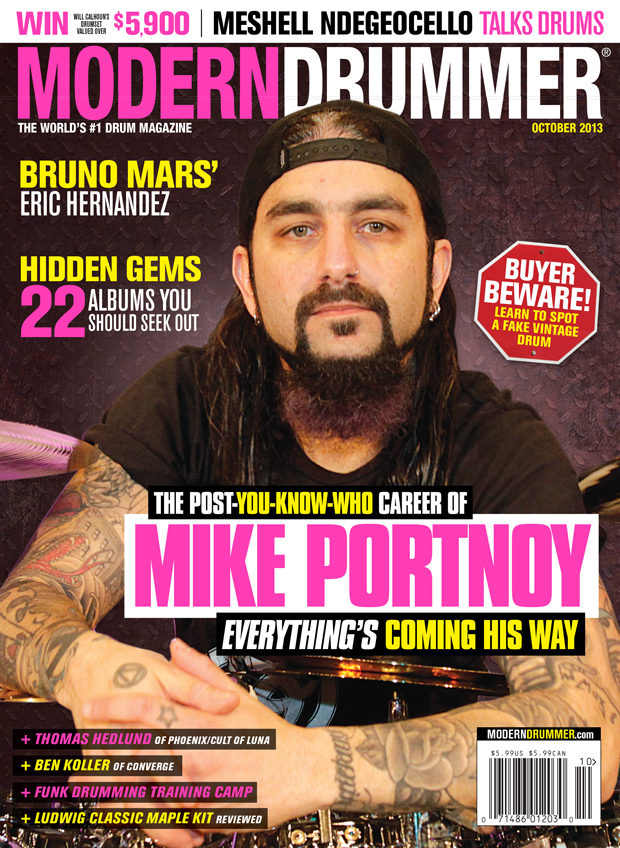 First Person Bill Bruford
His pull-no-punches memoir is now in its second printing, prompting the drumming hero to wax poetic as only he can in the book’s new prologue. It’s food for thought that the MD Hall of Famer felt readers might like to nibble on—and what an intriguing appetizer it is.

Portraits Converge’s Ben Koller
Finding inspiration ranging from the iconoclastic pomp-rock group Emerson, Lake & Palmer to hardcore titans the Descendants, the metalcore great has a wider musical scope than many fans might imagine.

Eric Hernandez
Bruno Mars may be his kid brother, but this drummer has plenty of star power—and musical chops—of his own.

Thomas Hedlund
His ability to absolutely kill it across a spectrum of styles, from electropop sensations Phoenix to trance-metal behemoth Cult of Luna, is rooted, he insists, not in technique but in pure emotion.

A Different View Meshell Ndegeocello
“It’s truly the drummer who keeps me buoyant and excited,” the great bassist, singer, and bandleader says. And with players like Chris Dave, Gene Lake, and Abe Laboriel Jr. to collaborate with, what’s there not to be excited about?

Collector’s Corner
Buyer Beware! Be Careful What You Bid For

AN EDITOR’S OVERVIEW
What’s Your Worth? by Michael Dawson

Kit of the Month Hoop Dreams