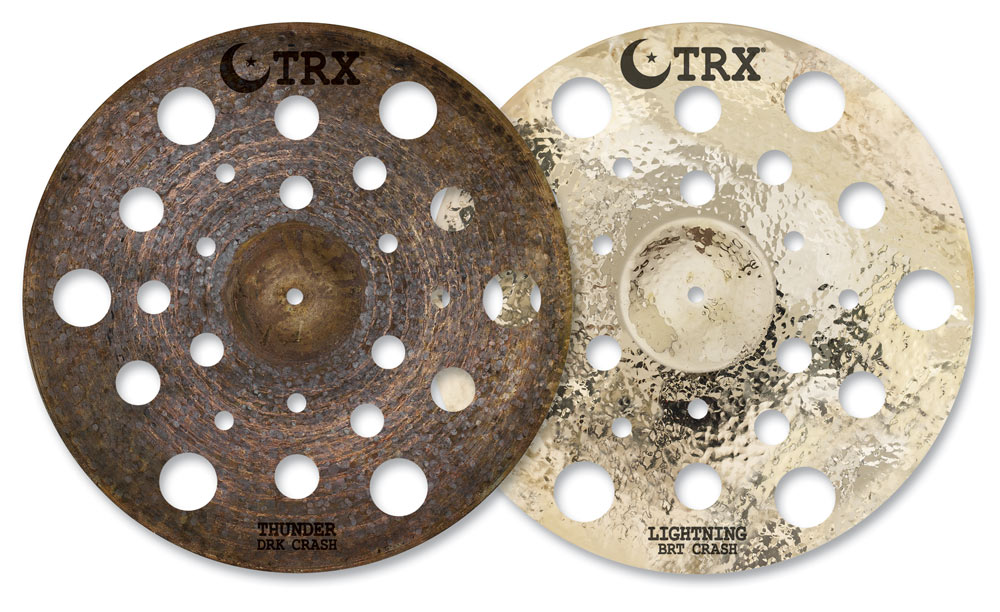 Vented cymbals are increasingly popular among drummers across numerous genres, from gospel to extreme metal. The vents have a threefold sonic impact, making cymbals sound darker, drier, and trashier. For 2013, TRX introduced Turkish-made vented crashes to its existing DRK and BRT lines, known as Thunder and Lightning. We had the chance the check out both types, in 16″ ($450), 18″ ($500), and 20″ ($550) sizes.

The BRT Lightning models are heavyweight crashes with a brilliant finish and an unlathed playing surface. This design promotes power and projection, so it works best for louder environments where cutting through higher frequencies is a concern. The vented pattern boosts the amount of attitude and bite in the attack, followed by a fast-rising swell. The vents also reduce the sustain of the trashy wash, leaving an even metallic overtone to ride out the decay.

The thinner DRK Thunder crashes had an earthier vibe, created by the combination of the vented pattern, low-profile design, and unlathed, raw finish. Each Thunder crash offered a wider attack, with a gritty pang and moodier overtones that consumed the trashiness during the decay.

For the complete review, check out the August 2013 issue of Modern Drummer.