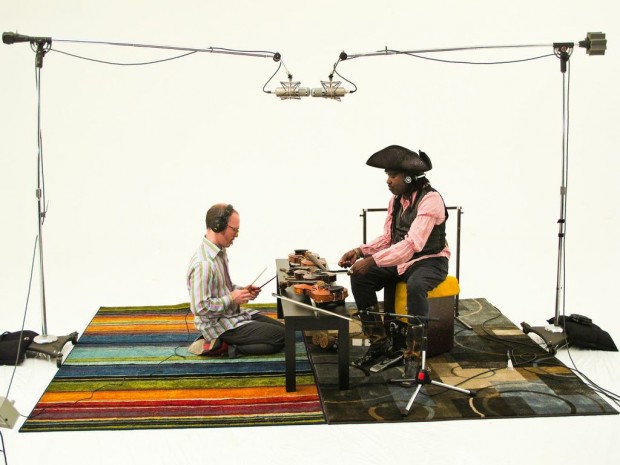 Béla Fleck and the Flecktones drummer Roy Wooten, aka Futureman, recently got together with fiddler and occasional Flecktones collaborator Casey Driessen for a two-day jam session and conversation for the project Fiddle/Sticks, in which Driessen has been exploring the fiddle as a rhythmic instrument. According to Driessen, the musical term fiddlesticks refers to an old-time Cajun technique where one musician takes chopstick-like items and beats on the lower strings of the fiddle while the fiddler saws on the upper strings. For his pairing with Wooten, Driessen laid out three fiddles, tuned in harmony with each other, while Roy played them with bamboo skewers and used a cajon for a bass drum. Here the two go into more detail about the nature of their jams.

Casey: Have you ever had an experience like this before?

Futureman: I have to say this is a unique one. Just drums and fiddle, with the fiddle being able to play with so much rhythmic power—it’s totally new. We were going back and forth, like drummers do. I would never have imagined that.

Casey: Are drums your first instrument?

Futureman: Boxes, beating on boxes. I got a drumset for Christmas at around six years old and busted the heads the first day. We were ready for the next level. Santa Claus just didn’t know it yet.

Casey: Did you study rudiments?

Futureman: I did. I was self-taught, but when I was in high school I started taking lessons from a teacher named Win Winfree, because I like all that Buddy Rich stuff.

Casey: How did you make the transition from sticks to fingers? How did the thought process for your instrument the Drumitar begin?

Futureman: The metaphor would be like somebody who is really into studying everything about the physical body and one day they want to go deeper and see it under a microscope. I wanted to dig deeper, to apply a note to every stroke, and open up each stroke to a melodic interpretation.

Casey: What were the first reactions to the Drumitar?

Futureman: At first people didn’t understand, but after the first Grammy and then the second one, people were like, “Oh!” And at every NAMM Show people would understand my new approach to the drums a little bit better. My whole approach was to never advertise it, let people experience it, be invisible. If they didn’t ask, then I knew I had passed the test. Then Max Roach came to one of the Flecktones’ shows. I didn’t see him, but we talked on the phone afterwards, and I said, “Max, you are such a big influence, you’re like my hero. We used to listen to you all the time.” And he said, “Nah, man, you’re my hero. I saw you playing but I didn’t see the drums, and when I saw what you were doing I thought: That’s some creative shit.” That’s all I needed.

Casey: Tell me about the RoyEl.

Futureman: This is the second version of the keyboard that I did. Now I’m getting to the Art Tatum side of town. It’s like if Buddy Rich was on the piano, it would be towards the Tatum thing—I want to push sticking technique and hear the rudiments in color.

Casey: I think it’s worth mentioning how your keyboard works. Each one of the pads that you have on the Drumitar is a pickup. You tap that and it sends a signal to a computer that stores the sounds you want to hear. On the RoyEl keyboard, there’s one of those pads underneath each key. And all the keys are covered with guitar picks. It was interesting for me to figure out what was going on. I don’t see your hands moving like on a piano, yet I’m hearing all these melodies. How are you getting different notes from those keys?

Casey: So the harder you’re hitting…

Futureman: …the higher the note, yes. Between Max Roach and the conga player with Curtis Mayfield, that’s where I got the bug for the drums having melody.

Casey: Boxes becomes drumkit becomes Drumitar, and that turns into the keyboard—which now turns into string quartets and orchestral pieces. You can follow the trajectory of it.

Casey: Let’s talk about the pieces we’ve been playing for Fiddle/Sticks. One of the things I really enjoyed from our two days together was the improv.

Casey: Yes, tons of communication. Some of the things were set musical ideas or snippets. But we did more improvising and communicating—whatever happens, happens. One [section] that was really fun for me was when you were on the snare drum and you said to play a groove. I didn’t play any notes, I just played the rhythm. We must have played for fifteen minutes straight.

Futureman: I felt like we were really embracing the heart of Fiddle/Sticks then. I had a muted mallet, and with my left hand I was just using my fingers on the snare.

Casey: Really? My eyes were closed the whole time.

Futureman: I feel like we really captured the soul of something special and some unspoken beauty while improvising together on three fiddles spread out like a koto. It made me want to throat sing. So I did. Sometimes it felt like the experience of a claw-hammer banjo, then a koto, then a dulcimer.

Casey: That was a highlight for me, getting to do that in the Infinity Room. The room is about a 13-by-13-foot cube, but there are no corners anywhere. It’s all rounded, so the sound can go forever. It rings. But there’s a visual infinity too, because your depth perception is skewed.

Futureman: It’s like you’re in heaven, there’s no end. I feel like we are living up to what you’re trying to do and where you’re trying to go with this project. The violin is not what it used to be. If Stravinsky could have heard that, he would have freaked out. How did you originally want to play the fiddle coming from this percussive point of view?

Casey: It’s not a style that I invented. It comes from Richard Greene, who was Bill Monroe’s fiddle player. Bill said he wanted Richard to work on his time and emulate the mandolin chop on 2 and 4. So Richard started doing that, and then he discovered that if he left the bow on the strings until the next beat, it would create an up-and-down sound. And that’s the basis of everything that I’m doing, that up-and-down [movement]. I was about eleven years old and in a bluegrass band when I started doing this, and I honestly thought I was on to something new. Then someone said, “Oh, you might want to check out Darol Anger,” who had developed Richard’s approach further. And after that, it was over for me. I grabbed that technique and tried to apply it to everything I was doing.

Futureman: I want to thank you for influencing and being a mentor to Tyler Andal, an upcoming master fiddle chopper following in your footsteps who performs around the world with me as a founding member of my Black Mozart Ensemble.

Casey: Are there specific moments of inspiration that have led to everything you’re doing now?

Futureman: Bruce Lee said, “You should study everything you like.” It’s a Renaissance way of thinking, and it just allows you to be interested in what you’re interested in. That’s what Renaissance people were—they did their thing, but they saw the big picture. Bruce Lee also said, “After a while, you just let your hands go—you’re not even fighting, you’re expressing.” And that’s what it’s like on the drums—you’re just letting it express. The epiphany is that it’s okay to expand and explore what you like. It’s good to know where your focal point is. I love science, I love law, I love art, but music was my focus.

Casey: You’ve also mentioned science fiction before, so is that where you get the name Futureman?

Futureman: Oh, we’re talking about time travel now. The story is that I was playing with the Flecktones at the Station Inn. We took a break, and Mark O’Connor and Jerry Douglas come backstage. Mark shook my hand and said it felt like I didn’t have any bones in my hand, that he just felt my energy. Mark or Jerry, I can’t remember which one said it, but they said, “He’s the future, man.” They wrote the first song on the Strength in Numbers album [The Telluride Sessions], with the title “Future Man,” and I said, “Okay, I’m going with that.” The moment I started using the name Futureman, I never had to explain why I invented new instruments or why I was doing anything futuristic. Futureman was my Shakespeare.