Since kicking off in February, Bon Jovi’s “Because We Can: The Tour” has been selling out arenas and stadiums across the globe. In the midst of a worldwide trek, the band has announced a new round of North American dates beginning this fall. Launching at Vancouver’s Rogers Arena on October 2, 2013, the fall leg will hit cities such as San Antonio, Anaheim, Spokane, Tacoma, and the tour will also return to Los Angeles, Las Vegas, Dallas, Toronto, and Montreal.

Select tickets will go on sale beginning Saturday, June 8, offering something for everyone with a wide range of ticket options, starting at $19.50 (plus service charges). 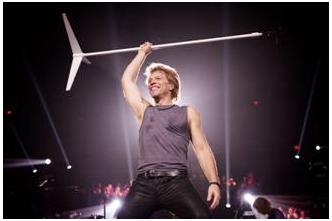 The 2013 arena tour takes live performance to a new level with a constantly evolving stage production. With over ninety high-speed moving elements, it is a kinetic sculpture of light and video, a living and breathing environment to support Bon Jovi on stage as they bring fans more than thirty years of hits and the latest, never-before-seen technology. To view the arena stage production in action, go to http://bit.ly/18w0AeC.

After wrapping up its European run, Bon Jovi will return stateside this summer with six stadium shows, beginning July 12 in Chicago. The stadium dates will feature a different state-of-the-art stage production, emulating a larger-than-life classic 1959 Buick Electra. These summer shows will include the Fan Kickoff Concert at FirstEnergy Stadium, where Bon Jovi will help the Cleveland Browns launch the upcoming football season, and will culminate with two nights at MetLife Stadium in New Jersey. To view the stadium stage production in action, go to http://bit.ly/13JcGgY.

What About Now is Bon Jovi’s third consecutive studio album to enter at number one, following Lost Highway and The Circle. While Bon Jovi continues to set the bar with a state-of-the-art live show, they also bring an interactive digital experience to fans via the free Bon Jovi app. Open the Bon Jovi app, click on Augmented Reality, and point your phone at the What About Now album artwork for an immersive experience.

And check out the teaser video below for an upcoming interview series with Tico from Modern Drummer.